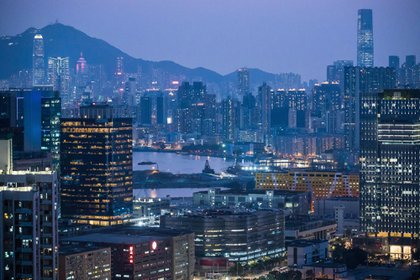 A construction site in the Kai Tak area, center, stands among illuminated buildings at dusk in Hong Kong, China, on Thursday, Feb. 20, 2020. Apartment rents in Hong Kong have dropped to the lowest in almost two years as people leave the city and home owners try to lease rather than sell. Photographer: Billy H.C. Kwok/Bloomberg

(Bloomberg) -- A Hong Kong internet provider said it’s blocked access to a website in order to comply with the city’s new national security law, in a case that’s fueling concerns about the future of free speech in the former British colony as China tightens control.

In a statement on Thursday, Hong Kong Broadband Network Ltd., part of HKBN Group, said it had prevented users from accessing HKChronicles.com, an anti-government website that has supported protesters and featured the personal information of local police officers and photos the website says are of pro-China individuals that have harassed protesters.

The blocking was done in order to comply with sweeping national security legislation that China drafted and imposed on the Asian financial hub in June last year, a move that was strongly criticized by the U.S. and U.K. and led numerous western democracies to suspend extradition treaties with Hong Kong.

“We have disabled the access to the website in compliance with the requirement issued under the National Security Law,” the company said. Hong Kong police did not immediately respond to a request for comment on Thursday.

Hong Kong was guaranteed continued freedoms distinct from mainland China when it returned to Chinese rule in 1997, but foreign governments, local activists and human rights groups have all criticized the new national security legislation as a move to quash dissent after historic protests in 2019.

The security law’s Article 43 allows police to request “a person who published information or the relevant service provider to delete the information or provide assistance.”

After Beijing signaled its plans to enact the security law, Hong Kong saw a spike in downloads of virtual private network, or VPN, software designed to mask internet usage.