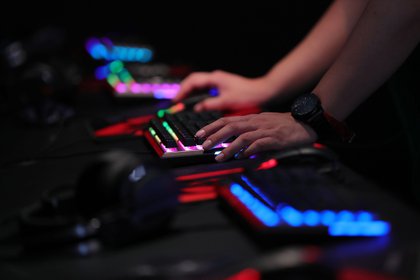 A gamer uses an illuminated keyboard to play a computer game at the Gamescom gaming industry event in Cologne, Germany, on Tuesday, Aug. 21, 2018. Gamescom is Germany's largest congress revolving around digital games, and acts as an interface with other cultural and creative branches, as well as with the digital economy according to their media site. Photographer: Krisztian Bocsi/Bloomberg

(Bloomberg) -- Motorsport Games Inc.’s top executive was accused in a lawsuit of wrongfully shortchanging investors when he acquired a discounted minority stake in a unit that is part of the company’s planned initial public offering.Dmitry Kozko, Motorsport’s chairman and chief executive officer, improperly usurped a “corporate opportunity” when the company acquired an additional 28% stake in 704Games, which makes Nascar racing games, according to a lawsuit filed Monday in state court in Miami. Motorsport already owned more than 53%, and the 704Games unit generates almost all the parent company’s revenue, according to the suit.

Miami-based Motorsport is scheduled to sell shares to the public on Tuesday. The company announced Monday it increased the IPO’s shares to 3 million and at a price of $19 to $20 each. That’s up from 2.35 million shares at $16 to $18 the company originally offered.The 28% stake in Charlotte, North Carolina-based 704Games was purchased at a discount by Motorsport from minority holders such as billionaire Phil Falcone’s HC2 Holdings, and came at the expense of other 704Games investors, according to the lawsuit. The additional stake now represents $94 million in value to Kozko and Motorsport, the 704Games investors said.

The 704Games investors contend Kozko and Motorsport officials are improperly using the IPO to “monetize the captured value” of the discounted shares to increase their stake in the company to more than 82% on the cheap.A representative for Motorsport and Kozko wasn’t immediately available for comment on the suit Monday.

As controlling shareholder, Kozko violated legal mandates that he allow 704Games’ board first shot at the discounted shares so it could offer “a substantial, low-cost return to all of the company’s remaining shareholders,” investors’ said in the 22-page complaint.Motorsport Games is the official developer and publisher of the Nascar video-game franchise. It also has a license to produce games for the British Touring Car Championship, or BTCC, according to a press release.