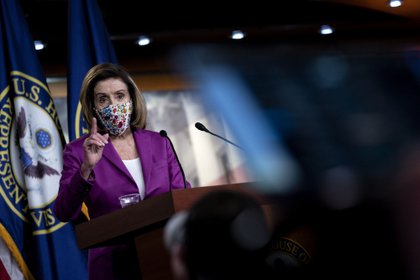 U.S. House Speaker Nancy Pelosi, a Democrat from California, speaks during a news conference at the U.S. Capitol in Washington, D.C., U.S., on Thursday, Jan. 7, 2021. Pelosi?joined Senate Democratic leader?Chuck Schumer?in calling for the removal of President?Donald Trump?in the wake of what many lawmakers from both sides of the aisle said was his incitement of the mob that stormed the Capitol.

(Bloomberg) -- A group of House Republicans who voted to accept President-elect Joe Biden’s Electoral College victory asked him to persuade Speaker Nancy Pelosi to back off impeaching Donald Trump for Wednesday’s riot at the U.S. Capitol.

The lawmakers, led by Representative Ken Buck of Colorado, warned in a letter to Biden on Saturday that Trump’s impeachment would inflame his supporters anew and damage Biden’s efforts to unify the country. “In the spirit of healing and fidelity to our Constitution, we ask that you formally request that Speaker Nancy Pelosi discontinue her efforts to impeach President Donald J. Trump a second time,” the wrote.

Other signatories on the letter were Representatives Chip Roy of Texas, Thomas Massie of Kentucky, Kelly Armstrong of North Dakota, Tom McClintock of California, Mike Gallagher of Wisconsin and Nancy Mace of South Carolina.