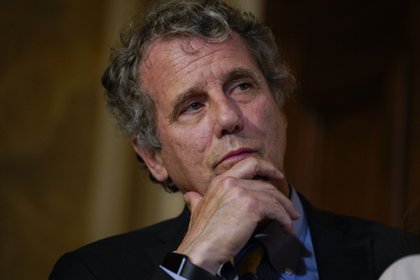 Senator Sherrod Brown, a Democrat from Ohio, listens during a news conference calling for the vote in senate on house-passed H.R. 8, Bipartisan Background Checks Act, at the U.S. Capitol in Washington, D.C., U.S., on Monday, Sept. 9, 2019. The Bipartisan Background Checks Act would require any firearm transfer between unrelated, unlicensed individuals  such as participants at a gun show  to be conducted through a licensed dealer, who is required to perform the background check on the recipient.

(Bloomberg) -- Sherrod Brown, Wall Street’s likely new overseer in a Democratic-led Senate, is no fan of big banks -- though the industry is counting on the near deadlock in the chamber to forestall any sweeping legislative efforts to rein in lenders.

Ohio’s Brown is well known to finance executives through his time as the top Democrat on the Senate Banking Committee, where he has blasted “too-big-to-fail” firms, urged regulators to step up investigations, championed affordable housing and has been a reliable critic of private-equity firms and hedge funds.

As the panel’s chairman, he will be a key player in shepherding through Joe Biden’s nominees for positions at the Securities and Exchange Commission, Federal Reserve and Treasury Department, including Janet Yellen, the president-elect’s pick for Treasury secretary.

Brown, 68, is also expected to aggressively exercise the committee’s oversight powers, regularly calling in executives and their regulators for public hearings. While he has not yet discussed his priorities in detail, Brown made clear in a Thursday statement that his focus will be on helping Americans recover from the Covid-19 fueled economic downturn, and that he will have little patience for financial industry lobbying.

“For too long, the Senate Banking and Housing Committee has only delivered for Wall Street – under new Democratic leadership, we’re going to get to work for everyone else, and put workers, and their families, and what matters to their lives, at the center of everything we do.” Brown said.

Brown’s office said he wasn’t available to comment at this time and that he intends to brief the media on his plans for the committee next week.

For their part, bank executives said privately that they were cautiously optimistic that they would be able to work with Brown on some issues like income inequality and infrastructure funding, though they noted his progressivism and frequent anti-bank rhetoric is worrisome.

Indeed, Brown has often aligned with Wall Street’s political nemesis, Massachusetts Senator Elizabeth Warren, also a Banking Committee member. Her influence is poised to grow on a Democratic-led panel. Also, California’s Maxine Waters will continue to lead the House Financial Services Committee, where she has been a frequent source of frustration for the industry.

Still, some analysts noted that unlike the 2008 financial crisis, banks haven’t been a driver of today’s faltering economy. So they probably won’t start this legislative session with a big target on their backs.

“Banks were deemed to contribute to the turmoil that ensued after the last crisis, but during the pandemic, they looked like heroes, helping their customers, deferring loan payments, providing the necessary financing to companies and consumers,” Jason Goldberg, an analyst at Barclays Plc, said in an interview. “So asking for big banks to break up today doesn’t make sense and probably won’t be the focus of Brown or others with newly gained powers.”

The gravelly voiced lawmaker likes to strike a strident tone against banks in hearings, but he is also praised by some executives for his sophisticated knowledge of the industry. Ohio is a Midwestern financial center and the home-base of regional firms such as KeyBank NA and Fifth Third Bancorp; JPMorgan Chase & Co. is also a major employer in the state.

Brown, who has been a senator since 2006, helped write the 2010 Dodd-Frank Act that set up new consumer protections and new strictures on banks. He often rails against “Wall Street greed” and was an original co-sponsor of a bill with Warren called the “Stop Wall Street Looting Act” that would increase rules and taxes for private-equity firms.

Few, however, expect legislation like that to move through such a closely divided Senate. Brown will be taking the gavel of the Banking Committee after the run-off elections in Georgia gave Democrats two seats, resulting in a 50-50 split. The incoming vice president, Kamala Harris, holds the tie-breaking vote.

In setting the panel’s agenda, Brown is expected to pay close attention to the SEC, the Fed, the Federal Deposit Insurance Corp. and other agencies that supervise the banking system. A focus will be making sure Biden’s picks for regulatory posts work hard to rescind the rule cuts that defined President Donald Trump’s time in Washington, observers said.

Likely targets include a controversial new standard for stock-broker accountability approved by the SEC that Brown has blasted for falling short of what’s needed to protect retail investors. He’s also said the agency’s sweeping overhaul of shareholder-voting rules for companies’ proxy elections took “the side of corporate interests.”

The senator hasn’t hesitated to delve into some of the more esoteric aspects of banking oversight, including little-known rules that were eased under Trump, saving Wall Street giants billions of dollars. He also was among the first lawmakers to rip the Fed last month for letting banks resume using their excess cash to buy back stock during the pandemic. Brown called the decision dangerous at a time when the extent of the economic damage remains unclear.

Another target for Brown has been leveraged loans, risky debt that Wall Street has piled onto the balance sheets of struggling U.S. businesses. He’s long contended that regulators need to get a better handle on the market, arguing that it could threaten not just jobs but the stability of the global financial system.Mehrsa Baradaran, who teaches banking law at the University of California, Irvine, said Brown stands a good chance of succeeding in pushing for banking rules that help consumers.

Brown is a “really experienced and wise legislator,” said Baradaran, who has worked with the Biden transition team. The senator is “Main Street focused, looking out for people and workers as opposed to just the people of Wall Street,” she added.