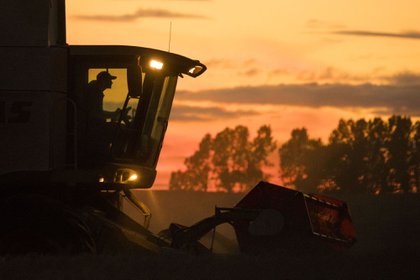 A farmer operates a Lexion combine harvester, manufactured by Claas KGaA, during the summer harvest in a field of wheat on the Morgue Estate in Tenterden, U.K., on Wednesday, Aug. 5, 2020. As harvests roll out across Europe, a season of droughts and floods have proven their toll on the continent's wheat crop. Photographer: Jason Alden/Bloomberg

(Bloomberg) -- The U.K. is looking at changing regulations to allow gene editing in farming, in a sign of shifting agricultural policy following the nation’s departure from the European Union.

The government plans to consult on whether to regulate certain gene-editing organisms differently from genetically modified products, it said in a statement ahead of a speech by Environment Secretary George Eustice.

Allowing gene editing could unlock substantial benefits to the environment and help farmers with crops that are resistant to pests, disease or extreme weather, he said. Genetically modified crops are banned in the EU.

“Gene editing has the ability to harness the genetic resources that mother nature has provided, in order to tackle the challenges of our age,” Eustice is scheduled to say at the Oxford Farming Conference on Thursday. “Now that we have left the EU, we are free to make coherent policy decisions based on science and evidence. That begins with this consultation.”

The consultation runs until March 17.