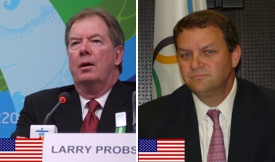 The chairman of the U.S. Olympic Committee, now in the second year of an eight-year term, is the best hope of the U.S. to regain clout in the Olympic Movement. Along with CEO Scott Blackmun, Probst has become a global emissary for the USOC, providing a presence at events and meetings that is vital for building relationships. But without viable Olympic bid prospects, scant leadership slots in international federations or representation on the IOC Executive Board, the U.S. is still on the margin of influence.

Probst, 61, seems a logical candidate to take a larger role in the leadership of the Pan American Sports Organization and the Association of National Olympic Committees as both head towards a change in leadership. Probst could be in line one day for a seat on the IOC. It’s up to him to grab the ring.

Big issue ahead for the USOC is sealing a deal with the IOC over a new revenue sharing agreement. The absence of a new agreement knocked the U.S. out of the running for the 2020 Olympics, a race the U.S. may easily have won. Now it’s possible that a Summer Games in the U.S. may not take place until 2028 or beyond.

The new leader of NBC Sports faces an important audition in 2012: delivering the first U.S. TV coverage of the Summer Olympics in 20 years without the legendary Dick Ebersol at the helm. With the NBC telecast such a bellwether for the health of the Olympics, the work of Lazarus and his team is critical in 2012.

While Ebersol was a hands-on production chief who directed the creative elements of the Olympic telecast (usually including a suite where he could sleep in the International Broadcast Center), Lazarus, 48, is known as a savvy manager who relies on his team to create the broadcast.

The look of the NBC coverage as well as the ratings it draws will be the first Olympic test for the new leader of the NBC realm. With NBC paying $4 billion to the IOC for the next four Games following London --more than any other single source of revenue, whether sponsors or rightsholders -- the network’s presentation of London under Lazarus will be an indicator of what’s ahead for Sochi, Rio, PyeongChang and the still-to-be decided 2020 host city.

Click here for more about ATR's Golden 25 and here to view the Golden 25 for past years.