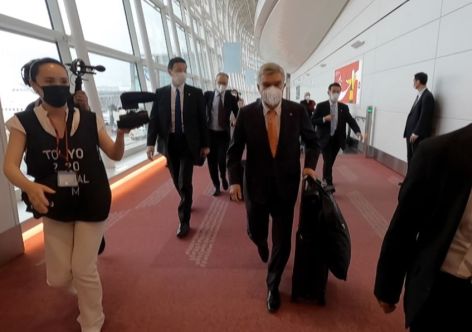 (ATR) IOC president Thomas Bach’s first public comments since arriving in Tokyo for the Olympic Games included a verbal stumble that won’t help his standing with the locals.

Before the start of his meeting with Tokyo 2020 president Seiko Hashimoto and CEO Toshiro Muto, Bach referred to the people of Japan as "Chinese" during his opening statement.

"Our common target is safe and secure Games," he said. "For everybody – for the athletes, for all the delegations, and most importantly also for the Chinese people … Japanese people."

The mistake, which Bach quickly corrected, was not translated into Japanese at the press conference but Japanese media reported it and the gaffe was soon a popular topic on social media.

Bach praised the Tokyo organizers in his comments, repeating his belief that Tokyo is "the best-ever prepared city for the Olympic Games".

Bach arrived in Tokyo on July 8 and then stayed in quarantine at his hotel for the required three days as required by the IOC playbooks designed to prevent the spread of Covid-19 infections in the host country.

Despite the many precautions, polls have shown an ever-increasing majority of the Japanese public do not want the Games being held now. They fear the Olympics will be a super-spreader event in a country where vaccinations are lagging and infections are rising. Tokyo and surrounding prefectures returned to a state of emergency on Monday that is scheduled to last until August 22, two weeks after the Olympics end on August 8.

Bach is expected to meet with Japanese Prime Minister Yoshihide Suga on Wednesday and to travel to Hiroshima on Friday. Protest groups say the visit to Hiroshima, which coincides with the first day of the Olympic Truce around the Tokyo Games, is politically motivated and are concerned with visitors from Tokyo coming to Hiroshima.

An online petition launched last week by a civic group calling for the cancellation of Bach's visit to Hiroshima had received over 40,000 signatures as of Tuesday night, according to Kyodo News.

The Olympic Village officially opened on Tuesday without any of the usual pomp and circumstance.

Covid-19 precautions prevented any ceremony or special event to welcome the athletes and officials to the village in Tokyo’s Harumi waterfront district.

Athletes will be living effectively in an isolated bubble and will have to comply with strict regulations against the coronavirus.

Around 18,000 athletes and officials are expected at the 44-hectare village.

The main press center at the Tokyo Big Sight international convention center also opened on Tuesday. The number of journalists covering the Olympics and Paralympics has been cut from 8,400 to 4,600 due to the pandemic, according to Kyodo News.