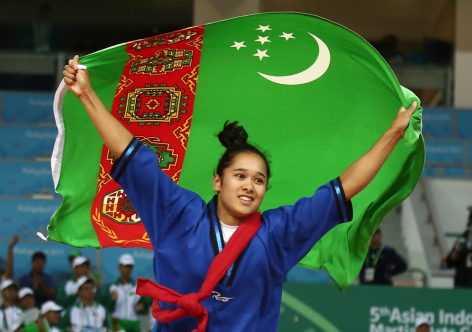 (ATR) Human Rights Watch and journalists tell Around the Rings they are disappointed in the lack of IOC intervention to guarantee press freedom and a commitment to human rights in Ashgabat, Turkmenistan for the 2017 Asian Indoor and Martial Arts Games.

According to democratic monitoring organization Freedom House, Turkmenistan is categorized as a "Not Free" country. In the organization’s democracy score index Turkmenistan received a score of three, tied for the second lowest given. Turkmenistan was tied with Eritrea, Uzbekistan, and North Korea on the index, with only Syria receiving a lower score.

Rachel Denber, Deputy Director for Europe and Central Asia at Human Rights Watch, told ATR the way to describe Turkmenistan’s human rights record is "full blown catastrophe". The situation there is one of a "very very closed and extraordinarily corrupt" country, Denber says.

"This is one of the most closed countries in the world with one of the most repressive governments that seeks to dominate and control all aspects of public life," Denber said. "It tolerates absolutely no criticism no matter how mild. There are at least 112 people that have been forcibly disappeared in Turkmen prisons. Elsewhere in public life there aren’t non-governmental organizations that can monitor human rights…the government does everything it can to shield itself from international scrutiny."

Ahead of the 2017 AIMAG journalists from the AP and The Guardian reported that previously accepted accreditations had been revoked less than two weeks ahead of the Games. Each outlet reported the Olympic Council of Asia cited "overwhelming response" by media outlets to cover the Games in Turkmenistan. [ATRhad applied for a credential to Ashgabat 2017, but did not receive a response to its request.]

ATR spoke with one affected journalist, Kieran Pender from The Guardian, who said that the OCA never responded to follow up questions regarding the accreditation. The OCA did not return requests for comment from ATR specifically regarding accreditation revocations for AIMAG 2017.

Pender said that he believes the reason given to him "was a blatant falsehood". He says he received his accreditation months ago only to have it revoked at the last minute.

"I planned to write a feature interspersing coverage of the intersection between sport and politics at the Games with color from some of the more unusual sporting events," Pender said. " It is a great shame I did not get an opportunity to see the country - and, after what I wrote about Turkmenistan's human rights record, I do not expect to be invited anytime soon."

There is a press presence in Ashgabat for the Games, including representatives from the International Sports Press Association. The full capacity at which the press corps can freely report on the Games and other social aspects of Turkmen life may not be known until journalists leave.

An IOC spokesperson said in a statement to ATR that AIMAG is "an independent sporting event that does not fall under the jurisdiction of the IOC." The spokesperson suggested that journalists should report "non-Games-related media complaints" to The Committee to Protect Journalists.

"The IOC has created a web-based reporting tool which enables journalists and media representatives working on Olympic Games-related coverage to lodge a complaint to the IOC following a press freedom violation they may have experienced," the spokesperson said. "Available in English and French, the reporting tool can be accessed via the IOC website at www.olympic.org/mediacomplaint."

Pender said he was given the same explanation by the IOC and said he didn’t believe it was "a satisfactory response on their part." He says awarding the Games to Ashgabat is at its heart a political act that "is in essence an attempt to legitimize a regime which has no respect for human rights."

"Giving future events to Ashgabat would only compound the damage that has already been done to the reputations of the IOC and OCA," Pender added.

Specific Games may be granted patronage by the IOC, meaning they would have to comply with the Olympic Charter. The IOC did not return a request for clarification if AIMAG fit this requirement.

Traditionally AIMAG has been a small scale Games under the auspices of the OCA. For the 2017 edition the government of Turkmenistan spent $5 billion for sport venues and infrastructure upgrades for the Games. ATR learned through an attendee of the Games that the officially reported price tag does not include the operational cost of the Games.

OCA President Sheikh Ahmad said at the Games he hopes the investment by Turkmenistan is a catalyst for the creation of a regional sports hub. Speculation has emerged that Ashgabat could bid for a future Asian Games based on the investment.

"This can be seen in previous host cities of our games, such as Doha in 2006, Hiroshima in 1994 and Beijing in 1990," Ahmad said in Ashgabat, referencing previous Asian Games hosts. "The OCA was a partner and a witness to that change."

Denber says "it seems counterintuitive" that Turkmenistan would court the AIMAG, but the event could be used to "boost its international prestige" for internal legitimacy. The silence regarding the human rights record outside of an OCA event has already cast a large shadow on sports bodies that can only grow.

"The OCA has maintained a very consistent line of complete and irresponsible silence," Denber said. "They have not replied to our letters, they have not made any public statements if they are doing anything to promote values [of the Olympic Charter] they are not doing it in a way anyone can scrutinize.

"I think this sends a message that the media freedoms pillar of the Olympic Charter means nothing. I think it is really up to the IOC to step in now to bring its Olympic family into order."