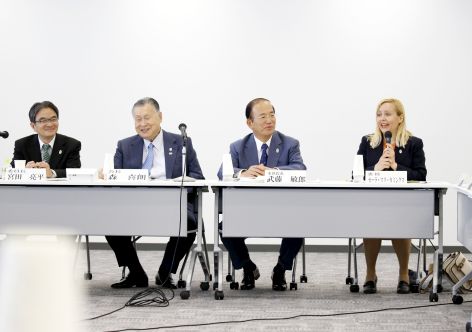 (ATR) The Culture and Education Commission for Tokyo 2020 will focus on the vision for the Games and ways to increase youth participation.

The diverse 28-member commission met for the first time on Wednesday to get the ball rolling on ideas to further youth engagement with the Games and ways to promote cultural exchange for those attending the international event.

Sarah Marie Cummings is one of the standout commission members with previous Games experience. Cummings is the president of Bunkajigyobu Company, a Japanese cultural institute who served as an assistant attaché for the British Olympic team during the 1998 Winter Games in Nagano. She was also involved with the preparations for these Games.

Tokyo 2020 president Yoshiro Mori and chief executive officer of the organizing committee Toshiro Muto were also in attendance for the commission's first meeting.

Ryohei Miyata will serve as the leader of the Culture and Education Commission. He is the current president of the Tokyo University of the Arts.

The next meeting for the Culture and Education Commission will take place later this year in December. They will hold their third meeting in July 2016. Event organizers say the group may meet more frequently as the 2020 Games approach.