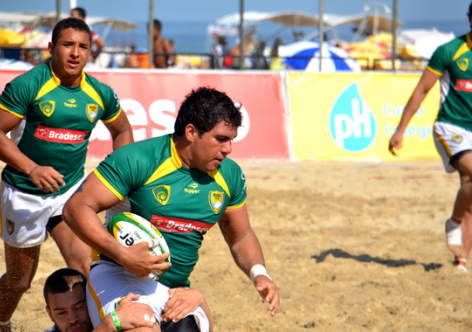 (ATR) Chief executive of the Brazilian Rugby Federation Augustin Danza tells Around the Rings the federation cannot waste the opportunity to grow the sport long-term after joining the Olympic program.

Ipanema Beach in Rio de Janeiro held a showcase of rugby sevens for the second year in a row, with help from World Rugby. Six national teams from Argentina, Brazil, Colombia, Italy, Portugal, and Uruguay competed in a televised tournament on Dec. 19. Danza said that by becoming an Olympic sport, rugby gained credibility in Brazil, and the best way to make a sport accessible to the people is playing it on the beaches in Rio.

"Everybody loves to see a sport being played in the beach of Rio de Janeiro, so for us this is a great way of showcasing rugby in a way that is familiar to Brazilians," Danza said.

"Firstly, the minute you become Olympic, you start getting funds from the Olympic Committee, so in the past five years we’ve been able to set up a lot of programs. There is now rugby being played in all states of Brazil, and our budget went from zero to 10 million dollars; all of that is because we became an Olympic sport."

A 1,000 seat stadium was erected on the beach for the event, and it received live television coverage in Rio. The event was made free to the public, so spectators could come and go whenever they would like.

The growth of the sport is palpable to Danza, who says that there are now over 60,000 rugby players in Brazil, with half of those being registered by the federation playing in officially sanctioned tournaments. In addition, many sponsors want to "link themselves to the Olympics and Olympic values," and have sought out partnerships with the federation, growing their capacity.

"All of this came because we became an Olympic sport, so now it is our duty now to make the most out of this opportunity," Danza said. "The Olympics have to become a clear before and after moment, and we cannot waste the golden chance we’ve been given."

Click here to view a gallery from the action on Ipanema Beach, and watch below for a video from the showcase.