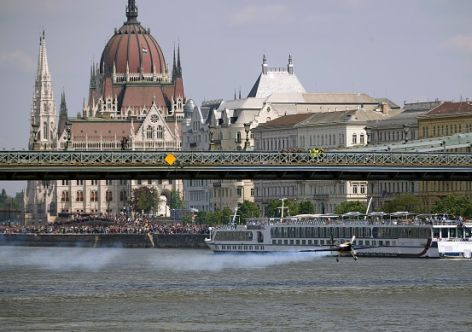 Hungarian pilot and world champion Peter Besenyei flies under the oldest Hungarian bridge, the 'Lanchid' (Chain Bridge) with his 'Corvus Racer' plane on May 1, 2015 during a flying and car show around the Danube River of Budapest downtown. AFP PHOTO / ATTILA KISBENEDEK (Photo credit should read ATTILA KISBENEDEK/AFP/Getty Images)

(ATR) Budapest 2024 is ready to demonstrate its ability to host major events with a slate of international sporting competitions scheduled for 2017.

"These will show to the world, the IOC and the Hungarians that Hungary is capable of organizing such big events," Budapest 2024 spokesperson Ivan Rozsa tells Around the Rings. "This year is really a test year, we have to prove to the people that we can do it because they do no not believe words, they want to see action."

The bid will enter the final stage of the 2024 Olympic bid race on Feb. 3 along with competitors Los Angeles and Paris. Budapest 2024 says it is enjoying its greatest amount of public support thus far as it enters the third and final phase of bidding.

"We are delighted to learn that support for the Olympic Games in Budapest is continuing to grow as more cities and communities across Hungary are backing the bid," said Budapest 2024 chief Balázs Furjes.

"As a nation, sport has always been a central feature of Hungarian culture and society, and this is reflected in public support to host the Olympic and Paralympic Games," Fürjes said.

Furjes’ comments follow the release of a survey conducted by Kód Kft in December that demonstrated a 12 percent increase in adult support for the Olympic project over the past six months. Out of the 1,000 citizens polled in the nationwide survey, 63 percent said they now support the bid.

The survey also concluded that 71 percent of the Hungarian youth would welcome the Olympics to Budapest. This indication of youth support could help deter a potential referendum sought by the politically-motivated group called Momentum Mozalom.

The youth organization is seeking 138,000 signatures in the next 30 days in order to initiate a referendum on the bid. Budapest 2024 tells ATR that the bid does not want to get involved in a political debate and that the Olympics would be an economic boon for the country.

"The Olympics can put Budapest on the map of the world," Rozsa tells ATR. "This would benefit our healthcare and education with more money flowing into the country from the tourism brought on by the Games."

Budapest’s next big test comes in May when the International Olympic Committee visits the Hungarian capital.

"We want to surprise the world with the quality of the work that we are doing," says Rozsa. "We want to show in Budapest that because we have a small city we can turn the downtown of Budapest into the biggest Olympic festival ever."

Eiffel Tower Upgrade on the Horizon

The proposal will require $320 million of funding to make renovations to the Eiffel Tower’s ticketing facilities and other upgrades designed at improving the visitor experience and increasing security.

The iconic landmark will be featured prominently if Paris is chosen by the IOC to host the 2024 Summer Olympics. According to the bid, the Eiffel Tower will be the backdrop of the beach volleyball tournament and will host the start of the triathlon and open water swimming events. The proposed road cycling and marathon routes will also take in the famous tower.

"The Eiffel Tower is an iconic French landmark, and it represents much of what Paris stands for," said Mayor Hidalgo. "These upgrades will highlight the Tower even further, to make it a flawless showcase of the Parisian welcome."

"This Olympics will center on blending Paris’ historic landmarks with an innovative, modern Games, and this development symbolizes that idea," added Paris 2024 co-chairman Bernard Lapasset.

"We are thrilled that these plans to update the Eiffel Tower coincide with our journey towards 2024 and we are looking forward to following the upgrades as they take place."

The Paris City Council will vote to approve the funding proposal at its meeting at the end of February.

Each of the sports on the 2024 Summer Olympic program now have a home in Los Angeles’ bid to host the Games.

Leaders of the Los Angeles Olympic bid selected the surroundings of the LA Stadium and Entertainment District at Hollywood Park, Frank G. Bonelli Regional Park and StubHub Center as the venues for archery, mountain biking and modern pentathlon on Jan. 17.

The announcement finalizes the venue plan for the bid using a majority of existing, planned or temporary venues.

"LA 2024 has the luxury of selecting the finest existing arenas in LA – not building new ones from scratch – and spending the build-up to the Games focusing our resources on elevating the experience for every participant, not on complex, costly construction," said LA 2024 chairman Casey Wasserman.

The decision on where to stage these three events came shortly after LA 2024 announced its plan to host the Olympic Opening Ceremony across two venues, utilizing both the iconic Los Angeles Memorial Coliseum and the new state-of-the-art Los Angeles Stadium at Hollywood Park that will house the NFL’s Rams and Chargers.

With this two venue concept, LA 2024 hopes to create a citywide spectacle in a never-before seen celebration. The ceremony would be the first time a host city utilized two venues to begin the Olympics.