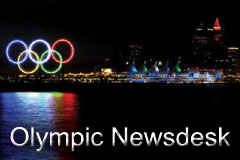 If a recent survey is to be believed, Britain’s young people are uninspired by next year’s Olympics.

A survey conducted by the Axa Ambitions Awards Scheme of 2000 British children aged 11 to 18 found that 70 percent do not want to participate in sport more because of the Olympics.

The British Olympic Association, which is charged with engaging athletes in Britain said of the results, "more work" is needed.

"With preparations for the Games on track and nearing the final phase, the various sport stakeholders in the UK now have an opportunity that is unique as compared to recent Olympic hosts: we have a meaningful opportunity to connect young people to life-changing values and benefits of participation in Olympic sport."

"International Olympic Committee President Jacques Rogge refers to it as the 'tyranny of the screen' and we must be innovative in finding new ways to get young people off the couch and onto the fields of play.

Twelve artists will design the posters for the London 2012 Olympics.

At a ceremony in London’s Tate Britain gallery Monday night, the winning artists were announced.

"It’s a moment when one can show how strong British art is and has been over the last 20 or 30 years," Tate Director Nicholas Serota was quoted by Bloomberg. "It’s a contribution by the host country to the Games."

One of the selected artists, Tracey Emin, described the creative path she may take.

"I might just draw in landmarks of London -- whether it’s the London Eye, the Houses of Parliament, bridges, and then within it put very nice words about encouragement, relief, challenge, all of those kinds of things."

The purchase of 110 adapted buses is top-of-mind for organizers of Guadalajara's upcoming Parapan American Games, now less than 150 days away.

The athletes village currently under construction in Guadalajara will need no adaptations to transition from the Pan American Games in October to the Parapan American Games in November, during which the apartment blocks will be able to accommodate 700 wheelchair athletes.

With accessibility chief on their agenda, organizers must now convince Jalisco state government to approve the purchase of the buses necessary to transport those Paralympians among the many venues.

More than 1,500 athletes from 26 countries will compete from Nov. 12 to 20 in 13 sports, all of which have qualification for the London Paralympics at stake.

A new strategic agreement between theInternational Rugby Board and International Wheelchair Rugby Federation will assist the growth of wheelchair rugby worldwide.

Under the partnership announced this week, the IRB will help the IWRF to develop education and training programs under the guidance of IRB Regional Training Coordinator Mike Luke.

Wheelchair rugby is actively played in 27 countries and has roots in another 10.

The Washington-based Council on American-Islamic Relations (CAIR) offered draft language to the U.S. Olympic Committee that can be used in asking for a policy change to allow a Muslim weightlifter to compete wearing a hijab.

Kulsoom Abdullah, 35, of Atlanta, needs the rule change in order to follow her religious beliefs – which require wearing a hijab – and also compete in the USA Weightlifting Senior Nationals in July in Council Bluffs, Iowa.

The International Weightlifting Federation's technical committee will consider the request at its meetinglater this month in Penang, Malaysia.

The language reads: "Officials will provide reasonable accommodation for the religious practices of competitors on condition that the accommodation requested does not provide a competitive advantage."

Abdullah is hoping to travel to Malaysia to make a presentation on the issue of religious attire.

The USOC had requested the draft language from the Muslim civil rights and advocacy organization. In his letter to USOC CEO Scott Blackmun, CAIR staff attorney Gadeir Abbas wrote:

"We believe that discriminatory international rules and regulations can never supersede American laws and traditions guaranteeing religious freedom. The issue of religious attire for athletes can be addressed successfully in a mutually-agreeable manner that maintains the legitimate rights and needs of all parties.

"Therefore, if the IWF rules against allowing reasonable religious accommodation, we request that the USOC and USA Weightlifting respect our nation's longstanding tradition of religious inclusion by allowing Ms. Abdullah to compete wearing hijab."

The Chicago Tribune editorializes that the Windy City should not bid for the 2020 Olympics.

Writing a blog for The New Statesman, Guy Walters suggests parallels between the Olympics and fascism, saying "both Olympism and fascism are secular religions that venerate the human body and seek the triumph of the will."