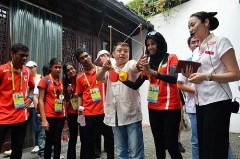 (ATR) A heat wave in Nanjing broke just in time for the Closing Ceremony of the 2013 Asian Youth Games.

Despite high temperatures, Husain Al Musallam tells Around the Rings there were no other difficulties in Nanjing.

"The [organizing committee] did it its best to find a solution for the unexpected high temps," said the Olympic Council of Asia Director General.

Temperatures soared to over 100 degrees earlier in the week, well above the normal average for August.

"The other things like transportation and security checks were all normal like every games. Transportation was no issue regarding the number of cars and drivers; the issue only was in the first day. Then everything moved smoothly."

2,413 athletes from all 45 NOCs took part in the Games, although Indian athletes had to compete as Independent Olympic Athletes.

India had 21 athletes sent home throughout the games because they were over age. India had previously been suspended by the IOC and had to compete as Independent Olympic Athletes.

OCA changed the age of participation from 18 to 17 to allow for athletes to compete in the Nanjing Youth Olympic Games in 2014.

"This may create some confusion with only one NOC in one sport," said Al Musallam referring to three Indian weightlifters that were sent home.

According to its director, the closing ceremony will be a "happy party" for the athletes involved.

"No element of the show has ever been seen before; it will shine," said Zhang Xiaosu, director.

"The athletes will be actively involved in the dynamic party and encouraged to dance from the opening moments. We will have many virtual presentations, including visions of the athletes taken over the past week at their sports and at the Asian Youth Village. We will show the shining parts of the Asian Youth Games."