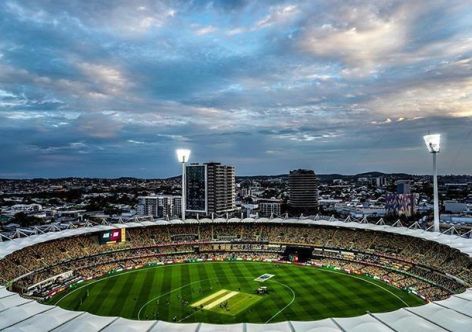 When Queensland Premier Annastacia Palaszczuk revealed in AprilBrisbane’s existing circular Gabba as the proposed main stadium if the IOC award Australia the 2032 Olympic and Paralympic Games - she may not have realized the extra significance in her words.

Brisbane’s front-running Bid chiefs are yet to join the dots but those in the international cricketing community, who also have deep connections to the Olympic Movement, have recognized a mouth-watering opportunity.

Indulge me for a few paragraphs and I’ll paint the picture.

Cricket, a sport involving two teams of eleven competing on a grass oval, has been played in England since the 16th century; international cricket games began in the 19th century. The contest between bat and ball has similarities to the sport of baseball but over the past century or so the best international teams have tended to be drawn from Commonwealth countries.

Cricket was played as part of the 1900 Paris Olympic Games, at the Vélodrome de Vincennes. The only match of the tournament was played between teams representing Great Britain and France. The Gold medal was won by Great Britain, who defeated the French by 158 runs.

Cricket hasn’t been part of the Olympic Program since, although there was a successful men’s 50-over cricket tournament at the 1998 Kuala Lumpur Commonwealth Games, with a star-studded South African team winning Gold and Australia the Silver.

Forward-thinking Olympic and cricket administrators have from time to time tried to bring these two sporting properties together – but over the past two decades the stars have never aligned.

There is evidence that cricket – which has sometimes given the impression that it doesn’t not want to join tennis, golf and rugby union as ‘mainstream’ anglophile sports in the Olympic program – may be open to becoming part of the world’s greatest sporting event.

For example, when the multi-sport 2022 Commonwealth Games takes place in Birmingham, England there will be a women’s Twenty20 cricket tournament.

So what have been the impediments to cricket’s inclusion, how would the Olympic family benefit from a change of heart – and why is the Gabba relevant?

The metrics of the business of modern cricket would make any sports administrator salivate.

India, the world’s largest democracy, cherishes the sport and its 1.4 billion population follow cricket with an almost religious fervor. There is no other sport that even comes close to being as popular as India’s national sport in the country – and those who play for the national team are deified by their fans – who are obsessed with everything to do with the sport. In short, cricket in India is a multi-billion dollar industry and a proven money-making machine.

Moreover, around a quarter of the world’s population under-30 live in either India, Pakistan or Bangladesh and all three countries are passionate about their national team. Indeed, India’s best cricketers are regularly the only Asian entrants in the Forbes global rich-list of sports-people. India’s cricketing superstars, for example, can command US$50 million in annual payments and endorsements.

The Olympic opportunity was recognized as far back as 2007, when Cricket Australia, the governing body in that country, presented a paper to the international Cricket Council (ICC) in Dubai encouraging the international governing body and the senior member countries to attempt to re-join the Olympic program. As it turned out, Rugby Union and golf gained the two available Olympic spots for Rio 2016 and cricket turned its back on the opportunity, despite becoming a recognized Olympic sport during that period.

England’s Cricket bosses had been overly worried that any Olympic tournament would be held at the height of English summer and would erode their profits during an important broadcast period for them. The all powerful Indian cricket Board – the Board of Control for Cricket in India (BCCI) – were, at that time, fearful of Indian government and Indian Olympic Association interference in their sovereign affairs and resisted any meaningful discussion at ICC level.

The 2007 Cricket Australia paper included intelligence from well-placed IOC administrators and voting members, who had advised cricket that the IOC was well aware that the value Lausanne received from the Olympic signal in the Indian sub-continent was "pitiful" and that the Olympic brand was weak in the region.

Those IOC thinkers with an eye on the future recognized that cricket would need to be part of the Olympic program if the IOC was ever to realize an appropriate value for its broadcast-product in India and its neighboring countries.

Equally, senior IOC voices argued that they could scarcely afford a situation in the middle of the 21st century where a quarter of the world’s population continued to be significantly disengaged from the Olympic Games and its famous ringed-brand.

These Olympic officials saw cricket as the solution.

Cricket to the Rescue?

So began 15 years of incremental reform that has quietly created the possibility of a breakthrough in coming years.

It could be argued that this push began on the eve of the 2008 Beijing Olympic Games when many of cricket’s international captains wrote a joint open-letter published around the world supporting the future inclusion of cricket in the Olympic Games, as a method of growing cricket’s international footprint – and as a device to create parity between men’s and women’s cricket.

One of the signatories to the letter - which was pushed by Australian cricketing-greats Adam Gilchrist, Ricky Ponting and Steve Waugh - was the former Indian captain Sourav Ganguly.

Few would have foreseen that just 13 years later Ganguly would rise to the most powerful office in Indian cricket – that of President of the BCCI. Many observers believe that office carries more influence than any senior role within the ICC due to the power India wields in the sport.

In the following years, the IOC started speaking to Mrs Nita Ambani, the wife of one of India’s richest men, Mukesh Ambani. The Ambani family – and their behemoth company Reliance Industries – are regularly mentioned in Forbes global rich lists. Mrs Ambani also takes a very hands on interest in the Mumbai Indians, as the owner of one of the most successful teams in the Indian Premier League, which is world-cricket’s richest club tournament.

Moreover, the Ambani’s had forged a close friendship with Sachin Tendulkar, India’s greatest ever cricketer who - although retired - is revered by every Indian on the planet.

By the time the Rio Olympics came around in August 2016, Mrs Ambani was elected an IOC member (India’s first woman IOC member) and she took Tendulkar with her to Brazil to see the Olympics for himself. This, in itself, sent a very strong message to India and international cricket: "we are getting serious about this ‘cricket in the Olympics’ idea…."

So it was interesting to read Tristan Lavalette in Forbes magazine in April this year report that: "….the ICC (is) forming an Olympics committee. The committee comprises independent director Indra Nooyi, Ian Watmore (ECB), Tavengwa Mukuhlani (Zimbabwe) and Imran Khwaja (deputy chairman), who according to sources was the instigator of the working group while he was the interim chairman last year.

"Former Associates Director Tony Brian, who was ousted from the board last year during the ICC elections, was originally part of the committee but has not been replaced.

"The committee has not yet met but – with India now coming to the party – it will hit the ground running by engaging the IOC formally on the matter..."

There is no doubt this is the most significant development in this slow-moving debate for years.

And with cricket’s concerns receding, and the Olympic movement full of modernizers who are thinking aloud about how the IOC ensures its future relevance and sustainability, this may be the moment these two leviathan sporting organizations find a way to coexist for mutual future benefit.

The 2007 Cricket Australia researchers also spoke to architects who turned the Melbourne Cricket Ground - a 100,000 seater super-stadium that was used for the 1956 Olympics – into the main stadium for the 2006 Melbourne Commonwealth Games. Essentially, the stadium was transformed from a international cricket field into a world-class athletics stadium – and back again, over a relatively short period.

Those architects and engineering experts told Cricket Australia that it is theoretically possible to host an opening Olympic ceremony in a main stadium on night one, then by using the grass oval maintained for javelin, hammer and other field events and by laying grass over the athletics track, organizers could run a Twenty20 cricket tournament in the main stadium during the first week of an Olympic Games.

They believed that at the conclusion of the cricket tournament they would be able to remove the grass from the athletics track overnight and quickly re-fit the stadium to host track and field athletics in week two of an Olympic Games, without effecting the integrity of the blue-ribband Olympic athletics events.

This ingenious idea, the researchers concluded, would ensure that the Olympic stadium was full of crowds for the whole 16 days of the Olympic Games – not just for the Opening ceremony and then during the athletics program (and closing ceremony) in the second week. That the Olympic stadium lies empty for a whole week – with just the lonely Olympic flame burning in its cauldron – is no longer necessary, they claimed.

And so we come to the Gabba. The stadium was used to host preliminary soccer games during the 2000 Sydney Olympics.

However, the Brisbane Bid organizers intend to renovate the centrally-located round stadium, increase its capacity and allow the amphitheater to showcase the ceremonies and the athletics events to the maximum.

Given that international cricket was first played at the Gabba in 1931 and is still an integral part of every Australian international Summer of cricket, it would be a mistake not to consider using the stadium given that fans can walk to stadium from Brisbane’s CBD in 15 minutes.

Aussies love the Gabba – and the Australian cricket team has a remarkable and unmatched history of success at the venue.

Organizers are equally blessed that the round Carrara-Metricon Stadium down the road at the Gold Coast – which was the main athletics stadium for the 2018 Gold Coast Commonwealth Games – could be requisitioned to host preliminary cricket games in any Olympic cricket tournament.

In January this year, Carrara-Metricon hosted a number of key matches in front of big urban crowds full of families in Australian cricket’s Big Bash League between competing city-based franchises. Equally, the smaller Allan Border Field in Brisbane’s North (Albion) would be a picturesque Olympic venue for women’s cricket matches and contests between smaller countries.

It has also not escaped notice that this week Cricket Australia announced Englishman Nick Hockley as their new permanent CEO. Hockley is understood to be quietly supportive of the ‘Olympic Cricket’ concept and knows the Olympic family well. Before he arrived in Australian cricket, he spent six years as Lord Seb Coe’s Head of Commercial Negotiations at the London 2012 Organising Committee.

In conclusion, if broadcasters and the IOC want to fill the main stadium, as well as the swimming venue in week one of the Games with screaming fans from a diverse range of cultures and countries, then a Brisbane Olympic cricket tournament at the Gabba Olympic Stadium in that first week of a Brisbane Olympics in 2032 is match made in heaven - for Olympic fans and cricket lovers alike.

Watch this space. You heard it here - at Aroundtherings.com - first.

Written by Philip Pope, who was the Head of Communications at the British Olympic Association from 2001-2005 during London’s 2012 bidding phase. He is the former Public Affairs Manager of Cricket Australia and the former General Manager Communications, Queensland Rugby Union. He is currently the Director of Media Services for the Curious Minds Media Agency in Brisbane.