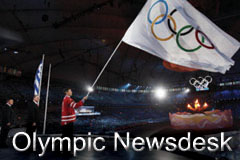 The newly-selected chefs de mission will serve as liaisons among the U.S. Olympic Committee, LOCOG, IOC, International Paralympic Committee and other national Olympic committees at next year’s Games.

"For us one of the most important things that our chefs do is to inspire our athletes to be the best that they can be and to model the kind of behavior that we want," USOC CEO Scott Blackmun said Thursday in a conference call with reporters.

"In Peter and Amy, we really have two people who a) we’re very very proud of as American athletes but b) we know we can count on to help us help our athletes be the best that they can be."

Now chairman of USA Gymnastics, Vidmar became the first U.S. man ever to medal in the all-around when he won silver at the 1984 Summer Games. Also in Los Angeles, he scored a perfect 10.0 en route to pommel horse gold and helped his country capture the team title as well.

"I’ll be honest, I was very humbled by this invitation," Vidmar said.

"It kind of caught me by surprise, but I’ll certainly give my very best efforts to ensure every athlete selected to represent the U.S. in London has the experience that they’ve prepared for."

A former president of the Women’s Sports Foundation and the first-ever amputee to run NCAA Division I track, Mullins competed in the 100m and long jump at the 1996 Atlanta Paralympics. She was also the world’s first athlete to don woven carbon-fiber prostheses modeled after a cheetah’s hind legs.

"This is Team USA," said Mullins. "This is a unified front, and we arecoming to London with our game face on."

The announcement came Wednesday from the Southern California Committee for the Olympic Games.

"It’s an honor to co-chair and participate in such an important internationalevent," Kwan said. "Historically, this conference has played a meaningful role in identifying ways to improve and increase participation of women in the world of sport around the globe. Women athletes are making progress; for the very first time, the 2012 Olympic Games in London will showcase women competing in every sport on the program."

Marshall, a former V.P. and treasurer of the USOC said "a gender gap persists particularly in the upper echelon of sport management positions. The Conference will bring together women and men from around the world to explore ways to change this dynamic."

The theme of the conference is "Together Stronger: The Future of Sport".

The SCCOG promotes the Olympic Movement throughout southern California, which includes Los Angeles.

According to media reports, the Olympic Council of Malaysia approved him for the position over the weekend.

He currently serves as president of the Malaysia Lawn Bowl Federation and was secretary to the government.

Thirty-three Malaysians in nine sports represented Malaysia at the 2008 Olympics.