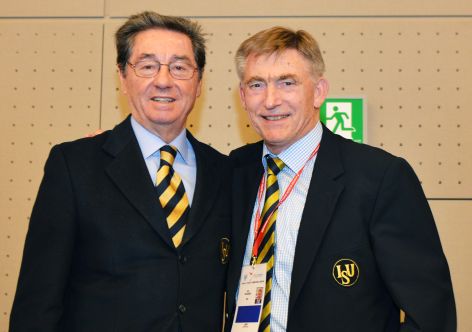 (ATR) Jan Dijkema of the Netherlands was elected as the new ISU chief at the federation's congress in Dubrovnik.

The ISU vice president won 63 votes to 52 for György Imre Sallak of Hungary in the second round of voting to secure the ISU’s top job. Succeeding Ottavio Cinquanta, he is the first new man at the helm of the ice skating federation since the Italian came to power in 1994.

Didier Gailhaguet of France and Britain’s Christopher Buchanan withdrew after the first round.

Dijkema, 72, is the third Dutchman to hold the post of president at skating’s governing body. Pim Mulier was elected at the founding congress in 1892, serving as president until 1895.Gerrit van Laer held the position from 1937 to 1945.

His presidential campaign focused on three pillars: promotion, marketing, & digitalization of the sport, development, and better governance and transparency.

The IOC will be happy thatGailhaguet was not elected. The head of the French ice skating federation was involved inthe Salt Lake City judging scandal which made him a controversial candidate from the outset.

Theo Fledderus, general manager of the Dutch skating federation and one of the members of the Dutch delegation in Croatia, described Dijkema’s victory as "good news for skating and the Netherlands", saying he could now "build on the renewal of skating".

After 41 years as an ISU official - 22 years as president - Cinquanta was awarded the title of honorary president. Congress delegates paid tribute to him with a standing ovation.