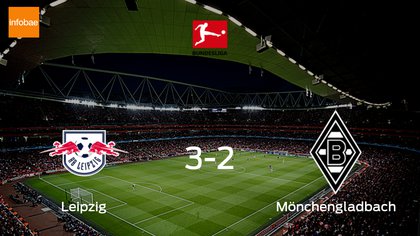 On Saturday, Mönchengladbach suffer an away defeat to Leipzig at Red Bull Arena. RB Leipzig were looking to pick up points after winning their previous two games in the league. The most recent was against the Hertha Berlin away (3-0), the other to Augsburg at home (2-1). Borussia Mönchengladbach had lost their previous match against Mainz. As it stands, RB Leipzig are in 2nd place on the table and has 47 points while Borussia Mönchengladbach sit in 8th with 33 points after 23 matches.

RB Leipzig continued to apply pressure the second half and were rewarded, following Christopher Nkunku opening the scoring, 57 minutes in. Later, their lead didn't last for long, as an equalizer from a goal from Yussuf Poulsen in the 66th minute brought RB Leipzig level. Later, RB Leipzig scored again and turned the match thanks to a goal from Alexander Sorloth in the 90th minute just before the final whistle. The game ended with a 3-2 victory for RB Leipzig.

There were bookings for Marcel Sabitzer and Dayot Upamecano from Leipzig and Nico Elvedi and Lars Stindl for Mönchengladbach.

RB Leipzig will next travel to SC Freiburg, while Borussia Mönchengladbach will face Bayer Leverkusen at home.