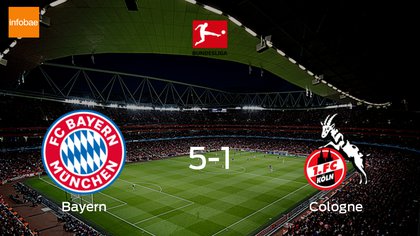 Bayern defeat Cologne 5-1 on Saturday at The Allianz Arena. With each team arriving on the back of a league defeat, they were both keen to pick up points. Bayern Munich were looking to get back winning ways, following a previous defeat to Eintracht Frankfurt. Cologne lost 1-0 in the last match they played against Stuttgart. As it stands, Bayern Munich are in 1st place, with 52 points from 23 matches, while Cologne sit in 14th, with 21 points from 23.

Bayern Munich started strong and were rewarded, with Eric Maxim Choupo-Moting opening the rout in the 18th minute. Later, Bayern Munich took the lead with a goal form a goal from Robert Lewandowski in the 33rd minute. The score at half time was 2-0.

There were bookings for David Alaba and Leroy Sane from Bayern and Rafael Czichos for Cologne.

Cologne and Bayern Munich will next play at home to Werder Bremen and Borussia Dortmund respectively.