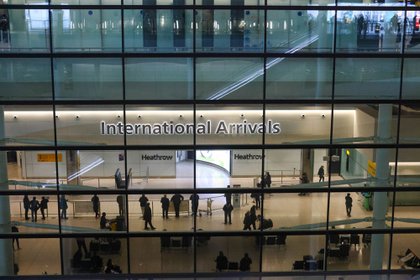 The International Arrivals area at London Heathrow Airport in London, U.K., on Monday, Jan. 18, 2021. U.K. ministers have closed travel corridors with other countries from Monday, meaning that all visitors from overseas will require a negative test result within 72 hours of travel to enter Britain. Photographer: Simon Dawson/Bloomberg

(Bloomberg) -- The U.K. is “actively” working on a plan to quarantine arriving travelers in hotels to guard against coronavirus infections from overseas, Prime Minister Boris Johnson said.

“We want to make sure that we protect our population, protect this country against reinfection from abroad,” Johnson said, adding the U.K. must consider there’s “at least a theoretical risk” that a new variant of the disease could prove immune to the vaccines his government is rolling out. “That idea of looking at hotels is certainly one thing that we’re actively now working on.”

In a pooled broadcast interview, the premier also said ministers will look at whether any current lockddown restrictions can be lifted ahead of the formal review date on Feb. 15, though he warned that relaxing the rules too quickly risks a new surge in infections. His office later clarified that date is the earliest point at which any easing could happen.

The government has promised to vaccinate almost 15 million of the most vulnerable people by mid-February, and Johnson faces growing pressure from within his Conservative Party to lay out a time-frame for reopening parts of the economy, especially schools once that target has been reached.

But with U.K. deaths likely to surpass 100,000 this week and the number of daily cases still high -- though falling -- Johnson said any lifting of the lockdown must be done in a “responsible, cautious way.” He reiterated the government’s priority to reopen schools as fast as possible.

“There’s nothing I want to do more than reopen schools,” he said. “We want to do that in a way that is consistent with fighting the epidemic and keeping the infection rate down.”