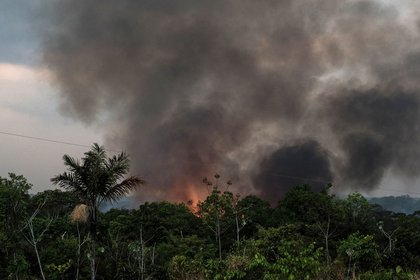 Smoke rises during a fire close to the Madeira River in the Amazon rainforest near Porto Velho, Rondonia state, Brazil, on Sunday, Aug. 25, 2019. The world's largest rainforest, Brazil's Amazon, is burning at a record rate, according to data from the National Institute of Space Research that intensified domestic and international scrutiny of President Jair Bolsonaro's environmental policies. Photographer: Leonardo Carrato/Bloomberg

(Bloomberg) -- Nordic asset managers that warned deforestation in Brazil is creating unacceptable risks for sovereign bondholders are starting to run out of patience.

With the rate of burning in Brazil’s Amazon and Pantanal regions on the rise, 50 financial managers overseeing around $7 trillion have now agreed to step up their pressure campaign, according to Storebrand ASA, the Norwegian life insurer that launched the movement about a year ago. If they don’t see signs of improvement, Brazil could lose investors and ultimately face higher borrowing costs.

“If this is a dialogue that can go on forever and there are no consequences, that also becomes a little bit hollow,” said Eric Pedersen, head of responsible investments at Nordea Asset Management. “I can speak for us only but we’re not going to do this indefinitely if we don’t see any progress.”

Sovereigns may be witnessing early signs of a shift in the balance of power as investors turn more activist and start attaching conditions to their purchases of government debt. Though the group of asset managers lining up behind Storebrand isn’t alone in driving an agenda guided by environmental, social and governance concerns, it stands out for engaging with governments directly to demand change.

For years, money managers largely left sovereigns alone when applying ESG metrics to portfolios. Countries would be quietly excluded, but not publicly shamed. That tactic was mostly reserved for companies, particularly those in oil, gas and coal. But investors appear to be growing a bit bolder.

For now, such examples remain the exception, rather than the rule. Access and legal standing are two reasons: it’s generally easier to get a chief executive officer on the line than a president or prime minister. Nor do investors have the same claim on a country as they do on a corporation.

Data has been an issue, too. The World Bank created an online service in 2019 to help channel financial flows to more sustainable activities.

There are very few investors that engage in activism when it comes to sovereigns. Well over half those polled last year by the Principles for Responsible Investment organization said they engaged with governments representing just 5% or less of their fixed-income assets, if at all.

There’s a “fear that voicing concerns can be misinterpreted as political criticism or lobbying,” said Sorin Pirau, a senior portfolio manager at Danske Bank who served on a PRI advisory committee that drafted guidelines for investors. Danske Bank isn’t participating in the Storebrand initiative.

On the whole, Nordic institutions have been at the forefront of addressing governments. Aside from Brazil, Nordea has also tried to pressure Belize and Ecuador as the biggest Nordic bank urges those governments to sign up to United Nations sustainability goals.

“This is just the beginning of larger realignment toward ESG investing,” Pedersen said. “And as ESG becomes mainstream, that will mean that less compliant issuers will have to pay more to attract investors.”

Demand among retail and institutional investors for debt issued by sovereigns that address social and environmental issues is growing. Assets under management by Nordea’s international emerging market debt bond team recently passed 8 billion euros ($9.7 billion), from under 7 billion euros last March, with most of inflows into ESG products.

Bankers say they have no intention of intervening in politics. Their interest in applying ESG criteria to sovereign debt is to improve returns and guard against losses.

Nordea stopped buying Brazilian sovereign bonds in 2019 after newly elected President Jair Bolsonaro loosened environmental protections and deforestation soared. It still holds some Brazilian debt bought earlier, and will use its position to “insist on tangible results” with regard to the Amazon.

Last year, the rate of deforestation hit its highest level since 2008, while fines by Brazil’s environmental enforcement agency plummeted.

Failure to protect natural resources, along with global condemnation, puts trade agreements, exports and tax revenue at risk, Pedersen said. In the longer term, “if the stewardship of the natural resources is such that maybe in 20, 30 years everything is going to be dust,” it may threaten a country’s ability repay debt.

“Clearly we are not happy with what we’ve seen,” said Jan Erik Saugestad, CEO of Storebrand Asset Management, adding that scientists warn the rain forest ecosystem is nearing a “tipping point” when it can’t support itself. “We made it very clear that words, promises and meetings are great, but we will look for tangible evidence that deforestation is actually going in the right direction.”

The campaign hasn’t been without “some wins,” helping to trigger “a much-needed debate on deforestation and economic risk in Brazil,” he said. In fact, the initiative, organized now as the Investors Policy Dialogue on Deforestation at the Tropical Forest Alliance, is considering other countries to engage with.

One is Indonesia, where the government is rejecting criticism that deforestation is responsible for widespread flooding.

“Pension funds primarily, but also private investors, have started avoiding the stocks and bonds” of oil and gas companies, Pedersen said. “The same thing can happen in the sovereign space.”