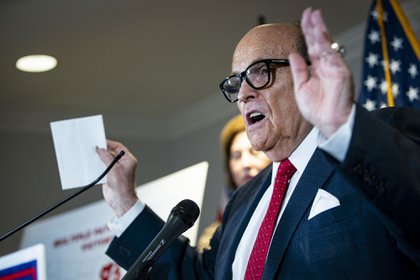 (Bloomberg) -- Donald Trump’s lawyer Rudy Giuliani was sued for $1.3 billion by the voting-machine company he and others repeatedly accused of conspiring to switch votes to favor President Joe Biden.

The complaint filed Monday by Dominion Voting Systems Inc. advances a defamation claim against Giuliani, who slammed the company’s conduct in public while declining to make fraud claims in court where he’d have to prove it.

“Although he was unwilling to make false election fraud claims about Dominion and its voting machines in a court of law because he knew those allegations are false, he and his allies manufactured and disseminated the ‘Big Lie,’ which foreseeably went viral and deceived millions of people into believing that Dominion had stolen their votes and fixed the election,” the company said in the complaint in federal court in Washington.