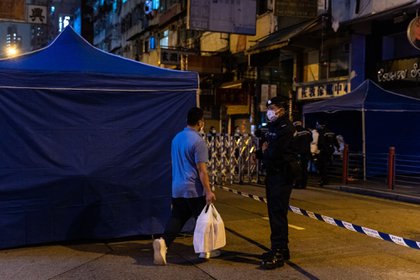 A resident carrying daily necessities returns to an area under lockdown in the Jordan area of Hong Kong, China, on Sunday, Jan. 24, 2021. Hong Kong imposed a temporary lockdown on thousands of residents for the first time to carry out mandatory testing of the coronavirus, with authorities warning the move will be repeated if needed to contain the outbreak.

(Bloomberg) -- Hong Kong lifted its first lockdown over the weekend that affected thousands of residents after it completed testing the people in the area to contain a worsening outbreak.

The government tested about 7,000 people, mostly in Kowloon’s Yau Ma Tei and Jordan areas -- known for their night markets -- and found just 13 confirmed coronavirus cases, it said in a statement. The effort involved more than 3,000 government officers from 16 departments, it said.

“The government hopes this temporary inconvenience will completely cut the local transmission chains in the district and ease residents’ worries and fear,” it said.

The unprecedented step was announced early Saturday as it aimed to complete the exercise within 48 hours.

The move affected about 10,000 residents, Hong Kong Secretary for Home Affairs Caspar Tsui said at a briefing on Saturday, adding 162 cases were found in the district since the start of 2021 through Wednesday.

Media reports emerged early on Friday on the pending lockdown, but the government was silent on the plan, leading to confusion as news outlets revised their reports. The South China Morning Post earlier said that the move would impact tens of thousands of people and would even include parts of Sham Shui Po, which was later scaled back.

“The government will use this restriction with mandatory testing order when necessary,” Chief Executive Carrie Lam said at a separate briefing on Saturday. The government will improve the way it communicates on such plans including the timing of announcements, Lam said, adding she won’t rule out that the measure will be taken again.

The move is a departure for a city that resisted a more aggressive stance earlier in the pandemic, though it still pales in comparison with the lockdowns adopted in mainland China, where people are sometimes banned from leaving cities, districts or even their apartment complexes.

Still, it is one of the most severe steps Hong Kong has taken to control the pathogen, and a blow to the government’s approach of trying to keep the economy largely running during the outbreak.