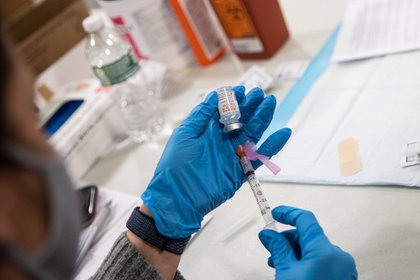 A healthcare worker prepares a dose of the Moderna Covid-19 vaccination at Queens Police Academy in the Queens borough of New York, U.S., on Monday, Jan. 11, 2021. New York City Mayor Bill de Blasio reaffirmed his goal of doling out 1 million Covid-19 doses by the end of January. Photographer: Jeenah Moon/Bloomberg

Governor Andrew Cuomo said more vaccines are on the way for New York, though he said the bigger challenge is getting skeptical Black and Latino residents to take the shot. U.S. governors are stepping up complaints that the federal government is not giving them enough vaccine.

A doctors’ group in the U.K. has urged the government to review the 12 weeks allowed for people to receive a second dose of the vaccine produced by Pfizer Inc. and BioNTech SE. The manufacturer suggests 21 days. Meanwhile, France’s top health authority recommends doubling that three-week gap as a way to stretch supplies and speed inoculations.

Los Angeles County, the epicenter of the latest wave, said the number of Covid-19 deaths reached the “grim milestone” of 15,000. Fatalities climbed more than 5,000 since the end of the year, its public health department said.

Hospitalizations fell below 7,000 for the first time this year at 6,881. Almost one in four of these patients are in ICU.

A drive-through virus testing site in the Dutch city of Urk was set on fire during a protest against a 9 p.m. nighttime curfew that began Saturday, Omroep Flevoland reported.

The protest, which at one point involved a procession of young people driving around in scooters and cars, went past the curfew time, according to the broadcaster. There was no report of injuries.

Pakistan is close to granting approval to Russia’s Sputnik V vaccine, as world’s fifth most-populous nation looks to start inoculations against the coronavirus.

California state officials are under fire for failing to disclose key coronavirus data that they say would only confuse the public, the Associated Press reported.

The state’s forecasting models help spot infection trends that will determine when businesses and restaurants will be allowed to reopen for indoor dining. Nearly half a million leisure and hospitality jobs in California have been lost in the year to date.

“There is more uncertainty created by NOT releasing the data that only the state has access to,” Dr. Lee Riley, chairman of the University of California, Berkeley School of Public Health’s infectious disease division, said in an email to the AP.

California Health and Human Services Agency spokeswoman Kate Folmar said in a statement that the complexity of the calculations “would mislead and create greater uncertainty for Californians,” AP reported.

U.S. governors are stepping up their complaints that the federal government is not giving them enough vaccine -- and it could be months before they inoculate those currently eligible.

“I’m not as worried about running out as I am about not getting enough,” New Jersey Governor Phil Murphy said Friday on CNN. He said he could use as much as four times the 100,000 doses the state now is allotted a week.

On Saturday, Governor Andrew Cuomo said it would take 17 weeks to get through the 7 million New Yorkers eligible to receive the vaccine. Nebraska Governor Pete Ricketts said on Friday the general population may have to wait four months before being eligible for a vaccine.

France registered 23,924 new Covid-19 cases over the past 24 hours, nearly unchanged from the previous day.

Prime Minister Jean Castex said the number of vaccinations passed the 1 million mark on Saturday, a goal that had been set for the end of the month. The government has come under criticism for the slow rollout of the campaign, which the country’s top health authority advised earlier could be sped up if the delay between the first and second injections is extended to six weeks. This would free up doses for a larger number of people.

Uruguay has signed its first vaccine deals with Pfizer Inc.-BioNTech SE and Sinovac Biotech Ltd. as the spread of coronavirus in the small South American nation gathers pace.

The government will purchase 2 million doses from Pfizer and 1.75 million from Sinovac, with delivery scheduled for March, President Luis Lacalle Pou said in a news conference on Saturday.

Chile will take delivery of 4 million shots from Sinovac next week, allowing the country to begin mass vaccination of its 18-million population, said President Sebastian Pinera. Half the doses will arrive on Jan. 28 and the other half on Jan. 31, Pinera said in a televised address late Friday.

Dr. Deborah Birx, who served as coordinator of the Trump administration’s Coronavirus Task Force, warned in an interview set to air Sunday that events surrounding Wednesday’s inaugural proceedings could prove to be a so-called superspreader event.

“Right now in the District of Columbia, there are National Guard troops here from every state in the union, probably, young individuals who are most likely to have asymptomatic infection if they do get infected,” Birx said in a preview of an exchange with Margaret Brennan on CBS News’ “Face The Nation.” “And they’re congruently living and eating maskless, 25 to 30,000 of them from all over the United States.”Birx, an internationally recognized AIDS researcher and former U.S. Army physician, said in the same interview that she “always” considered quitting her White House role as efforts to contain the pandemic became increasingly politicized.

The British Medical Association said the U.K. should “urgently review” its decision allowing a second dose of the Pfizer-BioNTech coronavirus vaccine as much as 12 weeks after the first, instead of the shorter gap recommended, the Associated Press reported.

The doctors’ group said there was growing concern in the medical profession about the delay, noting that no other nation has adopted the U.K.’s approach, the AP said, citing a statement.

The U.K. has administered 5.38 million first doses of vaccines overall and 467,000 second doses through Jan. 21, according to its Covid dashboard. Prime Minister Boris Johnson said Friday that a new variant of the virus that has emerged in the country may be deadlier than initially thought.

Italian Prime Minister Giuseppe Conte said that delays in vaccine consignments by Pfizer Inc and AstraZeneca Plc are “unacceptable,” renewing threats of legal action against the drug makers that so far have found little traction among European peers. In a Facebook post on Saturday, Conte said the companies are breaching their contracts with “direct impact on the life and health of citizens.”

Italy’s vaccination campaign, which had been one of Europe’s fastest, slowed down after a 29% decline in vial consignments of Pfizer vaccine this week. From next week, the company will further reduce deliveries in light of the fact that each vial is used for six doses rather than five. AstraZeneca, whose vaccine is set for approval by the EU’s medicine agency on Jan. 29, confirmed that it will be able to deliver 3.4 million doses to Italy in the first quarter, less than half of the 8 million originally planned, according to Conte’s statement.

People being treated for Covid-19 in U.K. hospitals fell for a third day, to 37,899 on Jan. 21. Another 33,552 positive cases were reported on Saturday, about 5,000 below the average over the previous seven days. Deaths were above the weekly average at 1,348. More than 5.86 million people have received a first dose of vaccine.

A day after saying New York was running out vaccines, Governor Andrew Cuomo said the coming week’s supply has begun to arrive from the federal government -- and he encouraged hesitant minorities to take it.

“Our bigger problem is the acceptance, especially among the Black and the Latino community,” Cuomo said on Saturday at a vaccine center in Brooklyn. “Why? Because they are skeptical. They are skeptical of a vaccine approved by the Trump administration.” He said New York had done its own reviews and that the vaccines are safe.

The state reported 13,786 new cases, continuing a trend of lower infections since hitting a record of almost 20,000 on Jan. 14. The statewide positive test rate dipped slightly to 5.26%, as did hospitalizations to 8,802. Another 144 people died.

Portugal on Saturday reported 15,333 new cases of Covid-19, surpassing the previous daily record announced Wednesday and bringing the country’s total to 624,469. The government also reported a record 274 daily fatalities, bringing the total 10,194. The number of patients in intensive-care units rose by five to 720. The country’s national health service has a capacity of about 1,200 intensive-care beds.

While confinement measures are in place, travel will be allowed on Sunday for voting in the presidential election. In Portugal, the president is mainly a figurehead and policy is set by the prime minister and his government.

German Health Minister Jens Spahn said he expects 3 million vaccine doses to be delivered to the country in February, despite production problems by AstraZeneca Plc. “Unfortunately, this will be less than expected”, Spahn told the Sunday edition of the tabloid Bild. He re-affirmed his pledge that all German citizens will be offered a vaccine by the end of summer.

France’s top health authority is recommending a doubling of the time between the two required Covid-19 vaccine shots as a way to stretch supplies and inoculate as many people as possible. Giving the second injection six weeks after the initial one would allow at least 700,000 more people to be protected during the first month. The French advice follows guidance two days ago by the U.S. Centers for Disease Control and Prevention that said follow-up doses could be given up to six weeks later if it’s not feasible to get them in the recommended interval.

Swedish Prime Minister Stefan Lofven said his government should have taken more aggressive steps and moved more quickly to stop the spread of the pandemic, and he takes full responsibility for the initial strategy that led the country to suffer a disproportionately high number of deaths.

In an interview with Dagens Nyheter, Lofven said the government’s response to the spread of the virus among the elderly was inadequate, and that testing should have begun earlier.

“As prime minister, I take full responsibility for the strategy that we have,” Lofven said.

Norway is imposing the strictest measures since March 12 in the area around the capital in an attempt to suppress infections of the more contagious coronavirus variant.

All shops, cinemas, restaurants and churches will be closed and the service of alcohol banned until Jan. 31, Health Minister Bent Hoie announced in a webcast speech on Saturday. Amateur sports and leisure activities won’t be allowed.