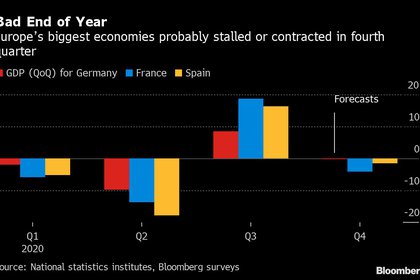 (Bloomberg) -- U.S. Federal Reserve officials will meet this week for the first time since Democrats took control of the Senate earlier this month, which has raised the odds of new President Joe Biden and his congressional allies passing a big pandemic relief package.

At the conclusion of the central bank’s two-day policy meeting on Wednesday, Fed Chair Jerome Powell will give the public a sense of how he and his colleagues evaluate the impact of the fiscal shift on the economic outlook amid rising Treasury yields and a stock market pushing to new record highs.

With yields on 10-year Treasury notes above 1% for the first time since the pandemic struck, investors are increasingly speculating that more government spending to aid the economy will allow the Fed to begin tapering its massive bond-buying program as soon as the end of the year. That’s in spite of Powell’s recent insistence that “now is not the time to be talking about exit.”

The government’s first look at official data on fourth-quarter gross domestic product, set to be published Thursday, will show what policy makers are working with. After a record 33.4% annualized pace of growth in the third quarter, the economy likely downshifted significantly. Forecasters surveyed by Bloomberg project a 4.2% pace of expansion in the final three months of the year.

Consumer spending, which accounts for about two thirds of GDP, is seen to have slowed to just over 2% growth -- after a third-quarter annualized surge of 41% -- amid a lack of further government relief and resurgent coronavirus outbreaks toward the end of last year.

“Monetary policy makers should acknowledge a slight improvement in the broader outlook when the FOMC convenes for its first meeting of the year. But the Fed’s measured optimism will intentionally fall far short of any hint that a shift in the policy stance will be considered anytime soon, consistent with Powell’s recent assertion that now is not the time to talk about the policy exit.”

Elsewhere in the global economy, the International Monetary Fund will this week update its economic outlook, and a slew of policy makers speak at the World Economic Forum’s virtual Davos Agenda conference. Central bankers in Nigeria, Colombia and Kazakhstan also hold meetings.

Click here for what happened last week and below is our wrap of what is coming up in the global economy.

Data from France and Spain will likely confirm their economies ended 2020 with another contraction. Germany, which will also publish GDP data, probably escaped that fate, but only just. The European Central Bank expects the euro zone’s economy to shrink in the fourth quarter, putting the region on the verge of its second recession in a year.

Poland, eastern Europe’s biggest economy, will publish full-year GDP figures. Elsewhere in the region, an IMF mission is expected to complete a review of Ukrainian economic policies. That may show what measures the government must implement before a staff-level agreement can be reached.

Nigeria’s central bank will likely hold its key interest rate on Tuesday as it confronts inflation at a three-year high. Officials may discuss ways to incentivize lenders to give out more credit to boost the economy. Monetary institutions in Kenya, Mozambique and Angola will probably also keep their benchmarks unchanged after decisions this week.

South Korea releases GDP figures on Tuesday that are expected to show the economy escaping much of the scarring that has hit other countries during the pandemic.

The Philippines hasn’t fared so well -- data Thursday is set to show a 9% contraction in 2020 according to Bloomberg estimates.

Hong Kong and Taiwan release GDP data on Friday. Meanwhile in Japan, a clutch of data at the end of the week will show how the economy was holding up before it entered its renewed state of emergency.

On Monday and Tuesday, Mexico posts economic activity and retail sales for November with the preliminary report on fourth-quarter output due Friday. The recovery from the deepest recession since the 1930s has been uneven and is losing some momentum heading into 2021.

The central banks of Chile and Colombia meet Wednesday and Friday respectively: both have no place to go but up with their key rates at record lows, yet are in no hurry to raise amid halting recoveries.