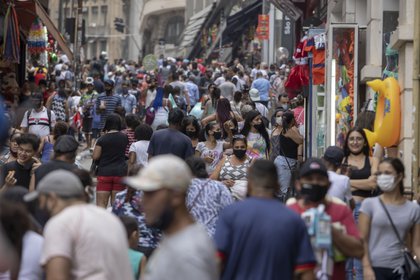 (Bloomberg) -- Brazil’s richest state ordered all non-essential activities closed on weekends and limited operating hours on weekdays, the harshest measures imposed in months as the epicenter of the pandemic in the country battles a new surge in cases.

Bars, restaurants and services including hairdressers have to remain shut between 8 p.m. and 6 a.m. on weekdays across the state of Sao Paulo starting Monday, officials including Governor Joao Doria said at a press conference. The restrictions also forbid those businesses of operating during weekends and holidays until Feb. 7

“We can’t wait to act. We’re trying to avoid a risk of collapse in four weeks,” said Patricia Ellen, the state’s economic development secretary. She added that if the current pattern holds, Sao Paulo could run out of Covid beds in 28 days.

The tough measures come about three months after the state’s capital, one of Latin America’s largest cities, allowed the reopening of movie theaters and other activities, the closest to resuming pre-pandemic life since the virus first arrived in the first quarter of 2020.

Much like in the U.S. and Europe, local officials had been expressing growing concern about the effects of the looser rules on infection rates. The worries were amplified by year-end festivities and the appearance of new, faster-spreading variants of the virus.

“The virus is spreading quickly across the state,” said Paulo Menezes, who’s part of the committee in charge of the virus response in the state. “We understand the economic, social and human toll of these measures. But there’s no alternative, we need to reduce the spread of the virus.”

Cases and deaths jumped 42% and 39% so far this month, respectively. The occupation of intensive care beds in the state rose to 71%, from 62% late last year. Current numbers of cases, hospital admissions and deaths are hovering near levels last seen in August.

Doria said on Friday the government will reopen one of the field hospitals that had been set up during the first phase of the pandemic. Officials also delayed the restart of public schools and suspended elective surgeries.

Doria’s government was already backtracking reopening plans and signaling stricter restrictions last year. It set similar limitations around Christmas and New Year’s, which at time was flagged by the government as a “warning.” In January, updates on the rules, once monthly, became almost weekly and criteria was changed to make it harder to loosen restrictions.

Brazil is second only to the U.S. in number of deaths from the coronavirus globally, with more than 214,000 fatalities, and ranks third in the world in confirmed infections. Sao Paulo, the country’s most populous state, has recorded 1.68 million cases and some 51,000 deaths from the respiratory disease.