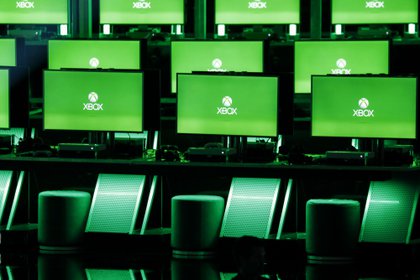 The Xbox logo is displayed on monitors during the Microsoft Corp. Xbox event ahead of the E3 Electronic Entertainment Expo in Los Angeles, California, U.S., in Los Angeles, California, U.S., on Sunday, June 10, 2018. Xbox previewed a flurry of new titles and deals with studios as the video-gaming division of Microsoft looks to compete more intensely with Sony Corp.'s PlayStation and a resurgent Nintendo Co. Photographer: Patrick T. Fallon/Bloomberg

(Bloomberg) -- Microsoft Corp. is raising the price for subscriptions to Xbox Live Gold, its paid online gaming platform, doubling the cost for an annual pass and prompting swift outrage from users.

The price bump brings the cost of a six-month subscription to $60. Last year, Microsoft removed the option for a full-year subscription at that price from the online store. The cost for a monthly subscription also increased, jumping 10% to $11.

Game Pass has become central to Microsoft’s strategy to attract loyalty with the recent release of the Xbox Series X console. But gamers were outraged that Microsoft would raise the cost of a subscription so drastically, especially during the pandemic, when people have been spending more time on screens than usual and unemployment has risen. Users expressed frustration online, often comparing the subscription cost to Sony Corp.’s PlayStation Plus, which is $60 a year.

On Twitter, where the subject was one of the top trending topics on Friday, a gamer named Zay said “Xbox users gotta sell their Xbox just so they can get Xbox live gold.”

One user said Microsoft is out of touch with its community and the economic reality.

In justifying the move, Microsoft said the price of Xbox Live Gold “has not changed for years and in some markets, it hasn’t changed for over 10 years.”

There is no price change for existing six-month or 12-month Xbox Live Gold members.