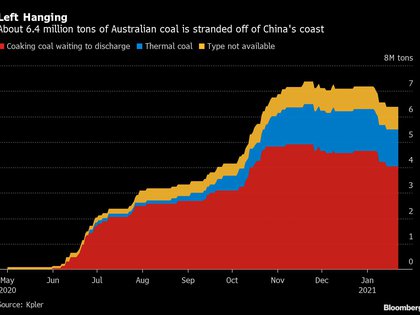 After loading up with coal the DZ Weihai slipped into the turquoise waters off the coast of Australia this month and began a 14-day voyage to the southern Chinese port of Yangpu. How long the ship waits to discharge its cargo upon arrival is anyone’s guess.

Despite a Chinese ban on coal imports from Australia that’s left about 70 ships, 1,400 seafarers and 6.4 million tons of the fuel in offshore limbo, some vessels continue to make the voyage. While the stranded cargoes and crew are trapped between authorities who won’t let them unload and buyers who won’t let them leave, perhaps most curious of all is what is driving additional shipments.

While mundane matters like contractual commitments play a role, traders are likely motivated by a mixture of hope and money. China is considering accepting cargoes that arrived before the ban boosting optimism restrictions could ease. If they do, a windfall awaits as the gap between Chinese and Australian coal prices has widened to a record.

“Chinese buyers with stranded cargoes are reluctant to resell these because the cost of these cargoes is so much less than domestic prices,” said Rory Simington, principal analyst at Wood Mackenzie Ltd. “Even if the cargoes are not released for another six months, the cost including demurrage would still be well below where the domestic prices are currently.”

A single 100,000-ton cargo of coking coal from Australia would cost a trader about $14 million based on seaborne prices not including transport costs. The same amount bought in the domestic market would be roughly $28 million. The cost for failure to unload a bulk carrier, known as a demurrage fee, is between $13,000 and $17,000 daily.

The Australian ban has never been publicly acknowledged by Beijing, making pinpointing its start date difficult. Chinese power stations and steel mills were verbally told to stop using the fuel in mid-October. Authorities also ordered traders to halt purchases of a raft of the country’s commodities, including coal, from Nov. 6.

Since Oct. 15, 20 vessels have loaded coal in Australia and signaled destinations in China, including the DZ Weihai this month, according to shipping data compiled by Bloomberg. Some of them, like the Rixta Oldendorff, diverted to other countries mid-journey. But at least 11 have joined the larger flotilla and are waiting outside Chinese ports to discharge.

​To be sure, China’s ban on Australian coal has shifted global flows of the commodity dramatically: mainland buyers ordered several South African coal cargoes in December and have boosted imports from Indonesia and Russia. The value of China’s purchases of Australian coal fell by 16% last year to $7.9 billion.

Still, China is considering accepting some Australian coal cargoes that arrived before the ban on the imports went into effect, a person familiar with the situation said this month. Deliberations are at an initial stage and any decision would need approval from senior leaders. The broader prohibition on Australian coal remains in place, and ideally the cargoes would be resold to buyers in other countries, the person said.

“It’s interesting to see new coal deals that have been done recently, despite no clear signal that China’s ban on Australian imports will be canceled any time soon,” said Monica Zhu, a dry bulk analyst with Kpler. “These are individual trader activities and may not represent the mainstream market.”