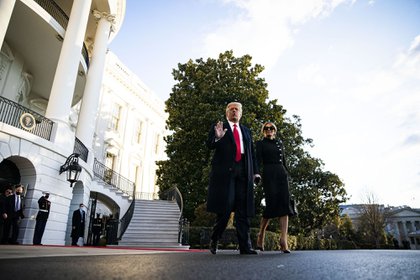 Democrats regained control of the Senate after a six-year gap on Wednesday, with the swearing in of two new senators elected Jan. 5 from Georgia, who represented the tipping point. Senate Majority Leader Chuck Schumer took the gavel from Republican Mitch McConnell -- but it’s not up to Schumer when the trial begins.

That decision rests with Pelosi, who hasn’t tipped her hand on when the House will formally transmit the single article of impeachment to the Senate, and multiple House officials said it wasn’t clear how long she would wait. The House last week impeached Trump on a charge of inciting the mob that stormed the Capitol on Jan. 6.

Sending the article to the Senate would require an almost immediate start for the trial, inevitably drawing attention away from President Joe Biden’s first days in office and slowing confirmation of his cabinet picks as most other Senate action gets shut down unless the Senate agrees to Biden’s request to dual-track the trial and other business.

“We are preparing for trial,” said Representative David Cicilline. The Rhode Island Democrat is one of the House’s nine impeachment mangers who will prosecute the case against Trump. Yet he gave no hint of when the proceeding would get underway, saying it was Pelosi’s call.

So far, only one of Biden’s nominees has been confirmed, Avril Haines as director of national intelligence. Votes on the others are likely to stretch into next week -- leaving him sitting atop a U.S. government filled with acting chiefs at every other cabinet agency.

One factor in the delay may be that the late start in the shift of Senate control has also held up negotiations between Schumer and McConnell over power sharing in a chamber split 50-50. Vice President Kamala Harris give Democrats nominal control with her tie-breaking vote, but Republicans retain the power to slow Biden’s nominees and agenda without a deal, including on how an impeachment trial would proceed.

“The first meeting was not as productive as we hoped,” Illinois Senator Dick Durbin, the chamber’s No. 2 Democrat said of those negotiations.

Splitting the Senate’s time between an impeachment trial and other matters, including votes on Biden’s nominees, likely would require at least some cooperation from Republicans. Some have indicated that might not be forthcoming.

“Nope,” Senator John Cornyn of Texas tweeted in response to White House press secretary Jen Psaki saying in a briefing that the Biden administration is “confident that the Senate can multi-task.”

Numerous Democrats have said that holding Trump to account was an urgent matter. But after his first House impeachment on abuse of power and obstruction of Congress on Dec. 18, 2019, Pelosi took four weeks, until Jan. 15, 2020, to send the articles over to the Senate for trial.

Some Republicans have been arguing that a trial should not be held at all and have urged Biden to halt the process, another indication that they won’t cede any ground to allow Democrats room for cabinet confirmations. They argue that it would further divide the nation and that it is unconstitutional to try a president after he’s left office, a point disputed by many legal scholars.

“I think we need to speak as soon as possible with as much unity as possible that a second impeachment of President Trump is bad for the country and we’re gonna fight that,” South Carolina Senator Lindsey Graham, who had been a close ally of the president, said Wednesday.

The longer the delay may sap any momentum there might have been for a conviction, despite the wide condemnation of Trump for egging on the mob that assaulted the Capitol. Five people died in connection with the riot, including a U.S. Capitol Police officer.

At least 17 Republicans would have to join all 50 Democrats to convict Trump. The Senate could then vote to bar him from ever holding public office again with a separate vote by a simple majority.

McConnell has told Republican senators that he hasn’t decided how he would vote on the impeachment charge and that it should be a vote of conscience. That’s a stark contrast from Trump’s first impeachment in which he said before the trial that he was “not impartial about this at all” and predicted Trump would be acquitted.

McConnell might sway some Republicans, but not necessarily enough to make the two-thirds majority necessary for conviction.

“I don’t know what the impact would be on the other members,” said Senator Mitt Romney of Utah, the lone Republican to vote to convict Trump on an article of impeachment last year.

“Senator McConnell has generally said each of you should vote your conscience and has not tried in any way to pressure folks to go one way or the other,” Romney said Wednesday. “I think he would very likely vote his conscience and expect each of us to do the same.”