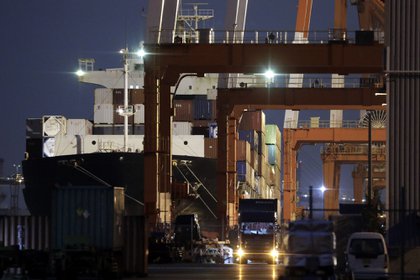 (Bloomberg) -- Supply Lines is a daily newsletter that tracks Covid-19’s impact on trade. Sign up here, and subscribe to our Covid-19 podcast for the latest news and analysis on the pandemic.

Japanese exports gained in December for the first time in just over two years, with shipments to China climbing even as the pandemic resurged in other key markets.

The value of overseas shipments rose 2% compared with a year earlier, snapping a 24-month losing streak that came amid trade wars and the coronavirus, the finance ministry reported Thursday. Economists had predicted a 2.4% increase.

Gains were led by exports of plastic, non-ferrous metals and equipment for making semiconductors, while car shipments declined.

Demand from China, which has managed to contain the virus and last quarter roared back to pre-pandemic growth rates, has given key support to global trade and to Japan’s export-reliant economy.

Still, the accelerating spread of coronavirus in the U.S. and Europe since the start of the year makes the trade outlook precarious.

“Looking ahead, we expect the recovery in exports to slow in January as demand from Europe and the U.S. sputters due the impact of the pandemic.”