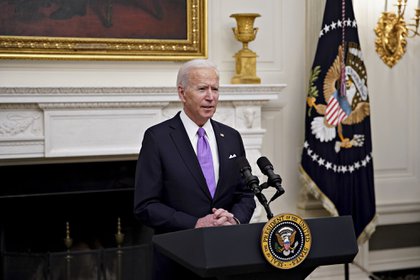 U.S. President Joe Biden speaks during an event on his administration's Covid-19 response in the State Dining Room of the White House in Washington, D.C., U.S., on Thursday, Jan. 21, 2021. Biden in his first full day in office plans to issue a sweeping set of executive orders to tackle the raging Covid-19 pandemic that will rapidly reverse or refashion many of his predecessor's most heavily criticized policies.

(Bloomberg) -- President Joe Biden will seek a five-year extension of the New Start arms control treaty with Russia, reversing the Trump administration’s hard-line stance in negotiations barely two weeks before the deal was set to expire.

The new administration planned to inform Russia about the decision sometime Thursday, according to two people familiar with the matter who asked not to be identified discussing private deliberations. Diplomats at embassies in NATO countries were also instructed to tell their counterparts, one of the people said.

Spokespeople at the State Department and the National Security Council declined to comment on the decision, which was reported earlier by the Washington Post.

New Start, which was set to expire Feb. 5, limits the number of strategic nuclear weapons such as submarine-launched missiles and intercontinental ballistic missiles. The Trump administration wanted to condition an extension on broadening the types of warheads covered by the deal and bringing in China as well -- ideas both Russia and China opposed.

“Hope this is not true,” Marshall Billingslea, envoy for arms control in the Trump administration, said in a tweet Thursday. “If so, shows stunning lack of negotiating skill. Took just 24 hours for Biden team to squander most significant leverage we have over Russia.”

In his confirmation hearing on Tuesday, Antony Blinken, Biden’s choice for secretary of state, said the administration would seek an extension but didn’t say for how long. He said the treaty is “manifestly in our self-interest” because it caps Russia’s nuclear arsenal and gives the U.S. “tremendous access to data and inspections that we otherwise wouldn’t have.”

Current U.S. officials believe that for all the areas of disagreement with Russia, President Vladimir Putin’s government continues to abide by the agreement. A spokesman for the Russian embassy declined to comment on Thursday, but a Russian Foreign Ministry statement released a day earlier said Russia wants a five-year extension.

“This would give Russia and the United States enough time to get down to a joint search for answers to the international security and strategic stability questions that are currently emerging,” the Foreign Ministry said.