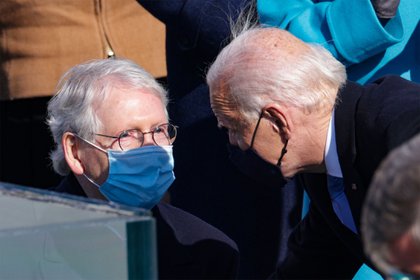 (Bloomberg) -- Joe Biden began Inauguration Day joining in prayer at a church service with the Democrats’ legislative nemesis, Mitch McConnell, a gesture of unity after four years of division and bitterness that will quickly be tested by the new president’s ambitious plans.

No relationship may be more important to the tone and domestic agenda of Biden’s presidency than his dealings with McConnell, the Senate Republican leader who bestowed on himself the nickname “Grim Reaper” of Democrats’ plans as he regularly obstructed Obama administration priorities.

Biden has frequently expressed optimism that he will be able to mend party divisions to make deals with McConnell, drawing on a shared history of 24 years together in the Senate and eight years across the table and at opposite ends of the phone line while Biden was vice president.

The Republican leader has suggested he intends to put some distance between his party and now former President Donald Trump, telling the Senate on Tuesday that the mob that attacked Capitol Jan. 6 was “fed lies” and “provoked by the president.” That could underpin a strategy to go into the 2022 midterm election with some tangible legislative achievements and a record more appealing to centrist suburban voters.

Biden’s hopes will be tested early with the incoming administration’s drive for quick passage of a $1.9 trillion Covid relief package as the economy teeters and Americans daily die by the thousands in the pandemic. The Biden team is also impatient for the quick confirmation of key cabinet members traditionally afforded incoming presidents while the Senate faces a potentially contentious impeachment trial of Trump.

Plenty of Democrats are skeptical of the prospects for cooperation.

“I think they’ll work together initially,” former Senate Democratic Leader Harry Reid said in an interview, identifying Covid relief and infrastructure investment as potential areas for compromise. “I’m hopeful that it will go on the entire Congress, but I have my doubts.”

The two creatures of the Senate may soon face a choice between accommodation, stalemate or an all-out battle to scrap the chamber’s revered filibuster, which allows a minority to block most legislation and fosters a climate of deference to individual senators beloved by most of its members.

In negotiating the rules for a 50-50 Senate with incoming Majority Leader Chuck Schumer, McConnell “expressed his long-held view that the crucial, longstanding, and bipartisan Senate rules concerning the legislative filibuster remain intact, specifically during the power share for the next two years,” Doug Andres, a spokesman for the Kentucky Republican, said.

Before long, “there’s going to have to be a decision made,” added Reid, who served in the Senate from 1987 to 2017. “In my opinion, it’s not a question of if, it’s when the filibuster goes away.”

Biden and McConnell, both 78, have a record of cutting deals on some crucial issues, including an agreement to make permanent most of the George W. Bush-era tax cuts in exchange for some of then-President Barack Obama’s economic priorities, which was scorned by critics in the Democratic Party’s liberal wing.

Reid said he sometimes asked Biden to act as intermediary when he was at loggerheads with the Republican leader. And McConnell has spoken appreciatively that Biden doesn’t waste time lecturing him on why he’s wrong and instead tries to find the path to a deal.

“They’ve built a good rapport over the years,” said Antonia Ferrier, a former senior McConnell aide. “Each one can tell the other this is how far I can go and can’t go. It’s very constructive and very brass tacks.”

Much may depend on the scale of ambition of a president who has identified the failure to “go big” as a critical shortcoming in the response to the last recession and has taken on causes such as stopping climate change, expanding health care access and righting racial inequities. And it will depend how Biden balances them against his instinct for political moderation and aspiration to be a unifying, healing figure.

Ferrier said she expects McConnell to work with Biden on “modest, meat-and-potato kind of steps,” but “if it’s a progressive goal, I would expect Senator McConnell and Senate Republicans to oppose.”

McConnell warned Tuesday that he didn’t consider the election “a mandate for sweeping, ideological change. Americans elected a closely divided Senate, a closely divided House and a presidential candidate who said he would represent everyone.”

While McConnell led the Senate during a $7.8 trillion run-up in the national debt since Trump took office, he and his fellow Republicans have now renewed a posture of concern about deficit spending. There were other signs as well that the GOP won’t be especially accommodating to Biden.

“What I’m concerned about is we seem to have no concern now about borrowing money in the short term,” Thune said. “When is it enough, when is it too much?”

Republican Senator John Cornyn of Texas was throwing cold water Tuesday on Biden administration’s hopes of prompt confirmation of cabinet secretaries if Trump’s impeachment proceeds, despite Biden’s efforts to get the Senate to split its time between the trial and cabinet nominations.

“That’s not going to be possible,” Cornyn told reporters.

If the relationship breaks down, Democratic control of the Senate at least gives Biden a partial workaround: the budget reconciliation process allowing a package every year of spending and tax items with a simple majority vote. That process, while limited by assorted Byzantine rules, can also approve a debt limit hike, preventing Republicans from threatening to force a default on government debt payments to press for spending cuts as they did in 2011.

Trump used the process to push through his tax cut package over Democratic opposition.

But as long as it takes 60 votes to overcome filibusters for most legislation, Republicans under McConnell can block many key Democratic initiatives, as they did in the final six years of Obama’s presidency. Preserving that power has been a major McConnell objective in ongoing negotiations with Schumer on the rules for the new Senate, divided 50-50 with only Vice President Kamala Harris giving Democrats control through her tie-breaking vote.

Moderate Democrat Joe Manchin of West Virginia has said he doesn’t want to give up the filibuster, though Reid said he believes moderates such as Manchin would come around to ending the tradition if confronted with more sustained obstruction. Reid and then McConnell each successively curtailed use of the power in confirmation fights.

Democratic Senator Richard Blumenthal of Connecticut said the assault on the Capitol and the crises the nation confronts nonetheless “should be a reset moment for us all.”

“Obviously there’s a lot of suspicion and doubt on our side given the history of McConnell in the minority under the Obama administration, a lot of reasons for skepticism,” Blumenthal said. “But we’re at a time of crisis unlike anything we’ve seen in our lifetime.”