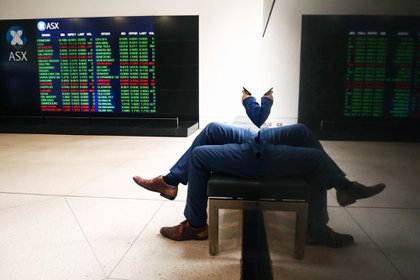 A man looks at his phone at the Australian Securities Exchange, operated by ASX Ltd. in Sydney, Australia, on Monday, May 20, 2019. Photographer: Brendon Thorne/Bloomberg

(Bloomberg) -- Technology companies are set to make up a bigger share of initial public offerings in Australia in 2021 as investor thirst for the sector appears unquenchable, according to dealmakers.

Out of the A$5.4 billion ($4.2 billion) raised in Australian company debuts last year, technology businesses accounted for A$1.3 billion, data compiled by Bloomberg show. At 24% of the year’s total, it is tech’s biggest share of annual IPO volume in at least a decade. Communications and financials, categories that include tech-adjacent firms such as broadband providers and online lenders, made up another A$1.5 billion.

The figures represent a shift in a region that in the last decade supported about twice as many IPOs for mining businesses as technology firms. During the pandemic, markets have generously rewarded companies that are poised to capture the growing embrace of digital platforms -- and to sidestep the worst-hit parts of the otherwise anemic global economy.

“There seems to be an insatiable appetite for technology and software businesses,” said Mark Burmeister, vice chairman of global capital markets in Australia at Morgan Stanley. “The most appealing businesses are those that are disruptive and sustainable.”

Standout IPO candidates have distinct barriers to entry, and large potential markets driving growth prospects over the near and long term. Such features are key to getting investors interested right now, Burmeister said.

Tech listings are holding buyers’ attention better than others. Companies in the technology sector that debuted last year in Australia have seen their stock prices rise by an average of 79% to date, compared to nearly 23% for 2020 listings overall.

“The interest in IPOs was strong, but it was a narrow field,” said Dion Hershan, managing director and head of Australian equities at Yarra Capital Management, an independent Australian fund manager.

Prior positive cycles for initial offerings have been indiscriminate, embracing companies in all industries, but not this time, Hershan said. “It was supporting the sectors that frankly had a ton of momentum behind them,” he said.

The IPO by the security software business Nuix Pty, which raised A$975 million, was not only the largest in Australia last year, it was also one of the best-performing, with the stock up 84% since its November debut. Over the same period, the next biggest, by coal port company Dalrymple Bay Infrastructure Ltd. in December, has fallen 18%.

One further shift that 2020 brought to Australian IPOs is that some firms are coming to market more quickly.

Replacing the time-consuming and travel-laden roadshow process with virtual meetings during the pandemic has shortened IPO marketing periods, said Rob Penney, partner at IPO advisory firm Reunion Capital Partners. A number of IPOs occurring near the end of the year even bypassed the issuing of pre-deal investor education research reports, which saved one or two weeks, he said.

“While we wouldn’t recommend this approach for every deal, where there are very clear listed comparable companies and valuation parameters, this approach will be used more and more,” he said.

Granada unable to avoid narrow defeat away to Betis (2-1)