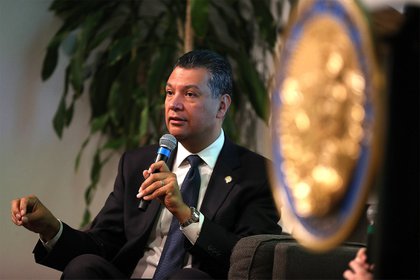 (Bloomberg) -- Democrats are set to take control of the Senate Wednesday with the swearing in of three new members, giving them the power to move forward with President-elect Joe Biden’s agenda and his nominees from his first day in office.

California Secretary of State Alex Padilla has been named to replace Vice President-elect Kamala Harris in the Senate. Jon Ossoff and Raphael Warnock both won in Jan. 5 run-off elections in Georgia. While that state still needs to certify their wins and deliver the results to Washington, all three men are expected to take their oaths on Wednesday, according to two people familiar with the plans.

Biden and Senate Democratic leader Chuck Schumer, soon to take over as majority leader, are planning to exploit their advantage with an opening sprint of nominations and legislation. The Senate also must deal with an impeachment trial of Donald Trump on a charge of inciting the insurrection at the Capitol, though the timing of that still isn’t settled.

The Senate has only been evenly divided three times before: in 1881, 1953 and 2001. Schumer and Senate GOP leader Mitch McConnell are due to meet Tuesday to lay out plans for how to balance power in the closely divided Senate as well as how to conduct Trump’s trial.

The split still poses significant challenges for Democrats. On most legislation, they will need support from 60 senators to cut off debate and move to a vote, under Senate rules.

Five of Biden’s cabinet nominees will already have begun their confirmation hearings when he takes office.

Janet Yellen, the former Fed chair who was picked to lead the Treasury Department; Avril Haines, his pick to be director of national intelligence; Alejandro Mayorkas, tapped for the Department of Homeland Security; retired General Lloyd Austin, Biden’s choice to lead the Defense Department; and Antony Blinken, his nominee for secretary of state, will all face questioning on Tuesday.

Despite those hearings, Biden is expected to take office with a cabinet made up largely, if not entirely, of acting secretaries. The confirmation hearings have to be followed by committee votes before the nominations go to the floor of the Senate. But Democratic control makes their confirmations more likely.

An early challenge will be to deliver on another round of COVID relief Democrats promised voters, including additional direct checks to most Americans. Biden has called for a $1.9 trillion opening package — a number far larger than Republicans were willing to back under the Trump administration. And it follows on a $900 billion bipartisan package Trump reluctantly signed in December.

Democrats will have a limited opportunity each year to fast-track a revenue-related bill to pass with just 51 votes. But even with legislation that requires only a simple majority, Schumer must either keep every Democrat on board or win over offsetting Republican support.

Schumer and Biden will be forced to navigate competing factions within his party, managing the demands of left-leaning lawmakers, such as Elizabeth Warren of Massachusetts -- with an energized progressive movement behind their push for higher taxes on the rich and new regulations in areas from climate change to health care -- while keeping moderates such as Joe Manchin of West Virginia voting with the party.