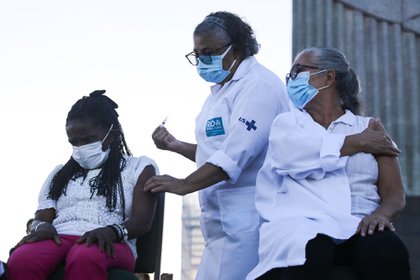 A healthcare worker administers doses of the Sinovac Biotech Ltd. coronavirus vaccine at the Christ the Redeemer statue in Rio de Janeiro, Brazil, on Monday, Jan. 18, 2021. Brazil accelerated plans to vaccinate its population against the coronavirus after an early start by the state of Sao Paulo added pressure on President Jair Bolsonaro to move faster to stem an incipient loss of popularity.

(Bloomberg) -- Brazil’s Fiocruz, which partnered with AstraZeneca/Oxford to produce coronavirus vaccines locally, said it may fail to deliver the shots on schedule next month because of difficulty getting a key ingredient from China.

The Rio de Janeiro-based research institute had planned to have the first million doses of the shots ready the week of Feb. 8. But the vaccine’s active pharmaceutical ingredient -- known locally as IFA -- is stuck in China awaiting approval to ship.

“It’s a bureaucratic issue. We made the request on December 9, and never expected it to extend for more than a month,” Marco Krieger, Fiocruz’s vice president, said in a video interview Monday. “We have some wiggle room, but not much. If we don’t get clarity on the days, we’ll unfortunately have a delay.”

Concerns about a shortage of vaccines even for the highest priority groups have emerged as the government kicks off its immunization campaign weeks behind countries including Argentina and Mexico. On Monday, Brazil began distributing 6 million doses produced by China’s Sinovac Biotech Ltd. in partnership with Sao Paulo’s Butantan Institute -- the only one readily available in the country. Yet Butantan is also facing shortages of key ingredients from China, leaving it with only 4.8 million more doses before it will run out. The total produced so far isn’t enough to cover even the groups that are first in line to receive vaccines.

The Chinese Embassy said in a text message that China sees cooperation with Brazil on the fight against the pandemic as “highly important” and says the issue “is being handled by the companies in accordance to the contract and set procedures.”

Fiocruz, which already supplies Brazil with most vaccines used in its regular national immunization program, will triple its factory capacity by adding the Covid-19 shots. Production will ramp up quickly: after a few tester batches, output should reach 350,000 doses daily by the second week, and double that the following. By the end of March, it should be pumping out 1.4 million doses a day, which will be given to Brazil’s public healthcare system, known as SUS. There are no plans to export vaccines at this point.

Fiocruz plans to start producing IFA locally in April, which should give a boost to production. Krieger said it’s “impossible” to speed up the process as equipment is still arriving and the health regulator has to OK the new production line, which is expected to happen in March.

“Starting production in April, we’ll begin deliveries in August, with the advantage that it will be a large batch,” he said. “This isn’t a 100-meter race, it’s a marathon. We have to be ready to produce millions and millions of shots this year, and probably the next.”

The goal is for the locally produced shot to cost less than $4 a dose including royalty payments, he said. It’s too soon to speculate on a timeline for all 212 million Brazilians to be vaccinated -- shots haven’t been tested in groups representing 30% of the population yet -- but he says 150 million people will be immunized by year-end.

Studies show getting two shots with a three-month span between them gives the best protection, Krieger said, adding that the second shot creates a significant immune response.

There’s also no clarity on when the shots Brazil purchased ready-made from India will arrive. The government had arranged a plane to go fetch 2 million doses over the weekend, but plans fell-through. Health Minister Eduardo Pazuello said he expects the issue will be solved within the next few days, but gave no firm dates for the batch to arrive.

“There were some diplomatic issues that we hadn’t considered,” Krieger said. “The expectation is that it gets here this month. That’s the deadline on the documents, but we don’t have that confirmed.”

Krieger says Fiocruz will likely file paperwork to fully register the Astra/Oxford vaccine with the regulator this week, now that the rush to clear both that shot and the one produced by Sinovac/Butantan for emergency use is over.

There’s no concern yet that the new coronavirus variants -- like the one found in Manaus, the capital of the Northern state of Amazonas -- won’t respond to shots currently available. But as the wait continues, the virus is raging through much of Brazil.

The country’s seven-day moving average of cases has hovered near a record for about 10 days, while the moving average of daily deaths is at levels last seen in August. With some 8.5 million infections, the country has the third-highest case count in the world, and is second only to the U.S. in deaths, with more than 210,000 fatalities from the virus.

“No country is dealing with the second wave well,” he said. “It’s very clear we are at the worst point yet, with distancing measures having little effect.”