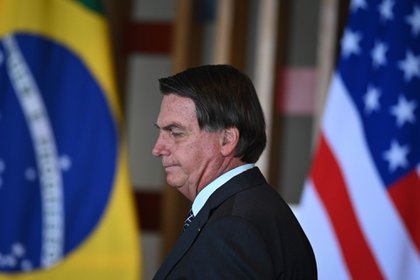 (Bloomberg) -- Brazil accelerated plans to start vaccinating against the coronavirus after an early start by the state of Sao Paulo added pressure on President Jair Bolsonaro to move faster and stem an incipient loss of popularity.

The government distributed on Monday 6 million doses of a shot produced by China’s Sinovac Biotech Ltd in partnership with Sao Paulo’s Butantan Institute to all of its 27 states and gave the green light for immunizations to begin this afternoon, according to an official statement. Less than 24 hours before, Health Minister Eduardo Pazuello had said the nationwide campaign would kick off on Wednesday.

Pressure on the Brazilian president and his health minister dramatically increased when Sao Paulo Governor Joao Doria organized a ceremony to administer the first dose of the so-called CoronaVac shot -- just minutes after the country’s health regulator approved its emergency use on Sunday. The picture of a Black nurse being inoculated was broadcast across Brazilian media and became a political win for Doria, one of Bolsonaro’s main political opponents.

“Bolsonaro is losing some backing of his supporters,” said Marcio Coimbra, a political scientist who heads the Interlegis think tank in Brasilia. “Emergency help was the main engine of his popularity, while the pandemic and vaccines have been a drag.”

Bolsonaro’s popularity dropped 6 basis points to 32% in January, one month after his program of cash handouts to informal workers expired, according to a XP/Ipespe poll that surveyed 1,000 people between Jan. 11 and 14. Half of those interviewed wanted the government to come up with a similar emergency program for a few more months.

The president, who has repeatedly questioned the safety of the shots against a pandemic that has killed more than 200,000 Brazilians, has been under growing political stress as national vaccination plans lag those of key regional partners and Covid-19 cases spiral again across the country. To complicate things, shipments of the AstraZeneca Plc booster -- the federal government’s main bet to sustain a mass campaign -- have been delayed with no new date set yet.

Without its main card readily available, the health ministry decided to start its nationwide campaign with the CoronaVac -- a shot that has been sponsored by Doria but repeatedly criticized by Bolsonaro “due to its origin.”

Several state governors, who have been demanding a more forceful response from the health ministry, celebrated the decision on social media by posting photos and videos of vaccine shipments being boarded onto Brazilian air force jets.

With the CoronaVac being distributed nationwide, Doria scores a political win that strengthens his position as a possible contender in the 2022 presidential elections, said Coimbra, cautioning that other names will likely emerge along the way.