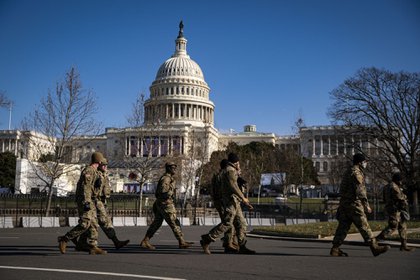 Members of the National Guard walk past a security perimeter outside the U.S. Capitol as preparations are made ahead of the presidential inauguration in Washington, D.C., U.S., on Saturday, Jan. 16, 2021. The U.S. capital is getting even more fortified with the help of patrolling by uniformed National Guard forces as federal, state and local officials brace for a worst-case scenario of violence tied to the Jan. 20 inauguration.

(Bloomberg) -- The Federal Communications Commission warned about not using amateur or ham radio to facilitate criminal activity. Composer Lin-Manuel Miranda of “Hamilton” fame will take part in the inaugural festivities. A man was arrested on Saturday near the Capitol with a gun and 500 rounds of ammunition in his vehicle.

There are three days until Biden’s swearing in.

Licensed amateur and personal radio services shouldn’t be used to coordinate criminal acts, the FCC’s Enforcement Bureau warned after reports that some people were looking to radios as an alternative to social media platforms, which are being monitored by law enforcement following the deadly Jan. 6 raid on the U.S. Capitol.

“The Bureau reminds amateur licensees that they are prohibited from transmitting ‘communications intended to facilitate a criminal act’ or ‘messages encoded for the purpose of obscuring their meaning,” the agency said in a statement Sunday.

The licensees, which would include Citizens Band radios, Family Radio Service walkie-talkies, and General Mobile Radio Service, would face fines, seizure of their equipment and possible criminal prosecution.

Lin-Manuel Miranda, the creator of the Broadway play ‘Hamilton,’ was added to the roster of artists taking part in inauguration day activities, the Biden campaign announced on Sunday.