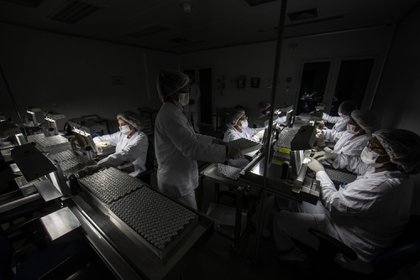 (Bloomberg) -- Brazil is poised to grant approval for the emergency use of AstraZeneca Plc and Sinovac Biotech Ltd vaccines against Covid-19, allowing the country to kick-start deploying shots as the virus roars back in Latin America’s largest economy.

A majority of directors at health regulator Anvisa cleared the boosters in a Sunday meeting, citing the recent significant increase in the number of Covid-19 cases in Brazil and the lack of alternatives for treatment of the disease.

While government technicians highlighted there’s still information needed on the shots, the benefits of vaccinations outweigh those risks, according to rapporteur Meiruze Freitas.

“We must continue monitoring the vaccines to capture adverse effects that were perhaps not seen in trials,” she said. “That is essential to ensure the benefits continue to outweigh the risks.”

Freitas was the first of five Anvisa directors weighing in on the requests, and was accompanied by two others, enough to approve emergency use of the shots. Two officials are still voting.

The rapporteur conditioned the approval of Sinovac’s booster to the signature of a term of commitment amid still missing data including on how long the shot offers protection -- a request not made of AstraZeneca’s vaccine.

She added that social distancing measures continue to be key, especially while Brazil does not have enough shots to immunize a large share of the population.

Bolsonaro Mistrusts Covid Vaccines and Brazil Is Falling Behind

Although it’s one of the countries hit hardest by the pandemic, ranking third globally in cases and second only to the U.S. in number of deaths, Brazil been late in vaccinating its 212 million citizens. Much like in the first phase of the pandemic, national vaccination plans have been marred by contradicting measures and political infighting.

The health ministry has said it would take between three to five days for the shots to arrive in all states, and vaccination would start simultaneously across the country. The elderly and health-care workers are first in line.

Like the U.S. and Europe, the country has seen a resurgence of the virus in recent weeks. Brazil reported 61,567 additional cases of Covid-19 and 1,050 deaths on Saturday. The country has about 8.5 million confirmed infections and 209,296 deaths.