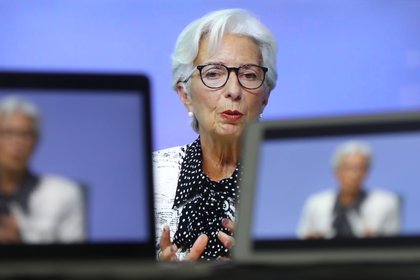 Christine Lagarde, president of the European Central Bank (ECB), speaks during a live stream video of the central bank's virtual rate decision news conference in Frankfurt, Germany, on a television screen arranged in Danbury, U.K., on Thursday, Oct. 29, 2020. Lagarde said there is little doubt that policy makers will agree on a new package of monetary stimulus in December as coronavirus infections and renewed lockdowns threaten a double-dip recession.

(Bloomberg) -- Resurgent coronavirus outbreaks will vex central bankers on five continents this week as they weigh the threat of more damage to growth against the hope that mass vaccinations will reopen economies.

Institutions meeting from Tokyo to Frankfurt to Ottawa are pondering the prospect of another lost quarter amid renewed lockdowns to contain the pandemic. Most are likely to maintain current ultra-loose policy settings without committing to more easing as they keep a wary eye on the path of the disease, while crossing fingers on its eventual eradication.

Like many of her counterparts, European Central Bank President Christine Lagarde put a brave face on the outlook last week, insisting that forecasts released in December are still “plausible.” She emphasized how previous uncertainties, such as the U.S. elections, the Brexit trade deal and the start of vaccinations, have eased.

But with rates of infection spiraling higher, and new restrictions on activity being imposed throughout the world, Lagarde and her colleagues at global monetary authorities can only hope that the tantalizingly slow pace of global immunizations will pick up and finally start to dent the impact of the coronavirus.

That sentiment is likely to be shared throughout the plethora of central banks due to meet in the coming days. Aside from the ECB, they include institutions in Brazil, Canada, Indonesia, Japan, Malaysia, Norway, South Africa, Sri Lanka, Turkey and Ukraine.

“Policymakers in Frankfurt will be feeling a strong sense of déjà vu -- an upsurge in Covid-19 infections risks a fresh set of containment measures, potentially with dire economic consequences. Fortunately, as the euro area enters a third round of restrictions, financial markets already understand the ECB’s reaction function and that significantly reduces the need for shock-and-awe action at its Jan. 21 meeting.”

Elsewhere in the world economy, Chinese GDP will show the economy’s strength at the end of 2020, and Janet Yellen is set to move a step closer to becoming the U.S.’s first female Treasury secretary.

Click here for what happened last week and below is our wrap of what is coming up in the global economy.

The holiday-shortened week in the U.S. will kick off Tuesday with Yellen’s confirmation hearing as Treasury secretary before the Senate Finance Committee, where she’ll also be tasked with helping to sell President-elect Joe Biden’s $1.9 trillion stimulus package.

The week will feature three reports on the state of the housing market in an otherwise light economic calendar. U.S. homebuilder confidence is forecast to remain near a record level on Wednesday, while housing starts on Thursday may climb to a fresh high and Friday’s existing home sales report also is projected to show a robust reading.

While the Bank of Canada isn’t likely to make any major changes to policy this week, the economy’s weak start to 2021 may be tempting officials to add some more stimulus to the mix.

With much of Europe now in the grip of lockdowns as tough as the initial restrictions imposed at the onset of the coronavirus crisis, the ECB’s first meeting of 2021 on Thursday will allow policy makers to assess the impact of their new round of stimulus unveiled in December.

Officials are trying to gauge if another economic contraction is imminent, and purchasing manager indexes due the day after their meeting will give them an initial clue. The reports due for manufacturing and services in January are predicted by economists to show another round of deterioration.

The U.K.’s PMIs will reveal the impact of post-Brexit trade disruptions on sentiment and activity since the country left the European Union’s customs arrangements at the start of this month, as well as the effects of continuing lockdowns. Other British reports due include inflation, retail sales and public-finance data.

Central bankers in Norway and Ukraine are forecast to keep rates unchanged, as are their colleagues in South Africa, though some analysts project more easing to support the economy after the government announced stricter Covid-19 lockdown measures.

Turkey’s central bank Governor Naci Agbal is expected to keep the nation’s benchmark interest rate at 17%, after a cumulative 675 basis points in increases since he took office in November. The hikes have stabilized the lira, but it remains to be seen whether they’ll be sufficient to contain inflation.

GDP data on Monday for the fourth quarter and full year are set to confirm China as the only major world economy to have expanded last year. Economists will zero in on December statistics for a pulse check on the recovery, with retail sales growth expected to quicken.

Early trade data from South Korea will offer a glimpse of how record virus cases are affecting global demand at the start of the year.

While the Bank of Japan is expected to keep its main policy on hold, Governor Haruhiko Kuroda could provide hints on what’s in store in a planned policy review. Japan’s consumer prices -- already falling at the fastest pace in a decade -- are expected to drop further in figures out Friday.

Colombia on Monday reports retail sales, manufacturing and economic activity for November, which taken as a whole should be consistent with a gradual recovery from a record recession.

Next up, Brazil posts its December economic activity figures along with a January reading on inflation after an acceleration last year. Against this backdrop, the country’s central bankers will likely keep the key rate at a record low, while sounding ever more hawkish in their post-decision statement.

Rounding out the week, Mexico unemployment data for December will see the jobless rate still well above the 2020 low even as millions of working-age Mexicans have fallen out of the labor force. On Friday, the mid-month reading of inflation will put it near the 3% target, probably a bit too fast for Banxico to consider policy easing just yet.