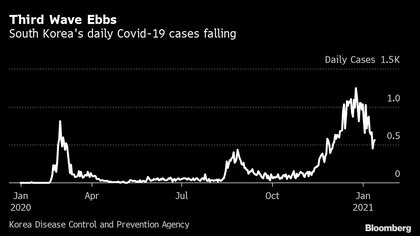 (Bloomberg) -- South Korea will extend social distancing measures, including a ban on gatherings of more than four people, for another two weeks, and health authorities cautioned residents against complacency after a decline in the number of coronavirus cases.

The alert level for the greater Seoul area will be maintained at 2.5, the second highest, while the rest of the country will be kept at 2, Health and Welfare Minister Kwon Deok-cheol said at a briefing in Seoul. Current measures were due to expire Jan. 17.

Restrictions will be eased conditionally for some businesses, including gyms and cafes, to limit the financial impact of the ban and to ensure the imposition of the measures is fair, the minister said. Cafes and restaurants will still be required to close at 9 p.m., and gatherings at clubs and karaoke bars remain banned.

“The government plans to ease measures on other facilities that have been excluded from today’s adjustment step by step after stabilizing the pandemic situation further,”said Kwon.

South Korea will impose a “special quarantine period” for two weeks from Feb. 2 in the run-up to the Lunar New Year holidays to prevent another wave of infections. The government urged people to refrain from visiting families and homes during the vacation.

On Saturday, South Korea reported 580 new coronavirus cases for the latest 24-hour period, with fewer than 600 infections for a sixth straight day, after they exceeded 1,200 in December. A winter surge continues to batter many countries.

(Updates throughout with minister’s comments.)