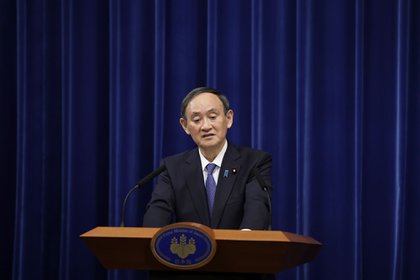 Yoshihide Suga, Japan's prime minister, speaks during a news conference at the prime minister's official residence in Tokyo, Japan, on Thursday, Jan. 7, 2021. Suga declared a state of emergency Thursday for Tokyo and adjacent areas, trying to stem Covid-19 infections that hit a daily record in the capital.

(Bloomberg) -- A surge in coronavirus cases in Japan has dealt a blow to Prime Minister Yoshihide Suga’s once strong public support, raising the risk he gets replaced by the ruling party ahead of an election that must be held by October.

Suga enjoyed some of the highest approval ratings on record for a new prime minister in September, when the ruling Liberal Democratic Party installed him as its leader. But with poll numbers falling as sharply as coronavirus cases are rising, questions are emerging as to whether he might join the long list of Japanese premiers forced out after short stints.

“It’s likely they will seek to vote in a more popular leader in the September party leadership election,” Yu Uchiyama, a professor of political science at the University of Tokyo, said adding that “a lot of LDP lawmakers” were concerned about their prospects under the Suga banner. “The party leader is the face of the lower house election.”

Support for Suga’s cabinet tumbled 7 percentage points from the previous month to 33% in a poll published by the Mainichi newspaper Saturday, compared with 57% of respondents who said they didn’t support the cabinet.

Suga is set to give a policy speech at the opening of the new parliamentary session Monday, in which he may lay out plans to add penalties to a law on virus management. The session provides the prime minister a chance to try to win back support for his government before a crucial decision on whether to go ahead and stage the Tokyo Olympics, an event set to start in July that he has said he’s determined to hold despite mounting opposition.

Suga, 72, came to power promising to maintain the ultra-easy monetary stance and other policies that helped make his predecessor, Shinzo Abe, Japan’s longest-serving prime minister. At the same time, the farmer’s son signaled greater focus than his long-time boss on pocket-book issues like mobile phone charges. He laid out a dual strategy of bolstering the economy while containing the virus.

The continuity pledge helped send the Nikkei 225 Stock Average to an all-time high in dollar terms in January, even as the economy staggered back from the worst downturn on record. But public opinion quickly began to sour after Suga blocked a group of scholars who had been critical of Abe’s policies from an academic advisory body and a campaign finance probe entangled several of the former prime minister’s top aides.

At the same, the government came under increasing criticism for maintaining its “Go-To” travel campaign to spur domestic spending despite concerns it was helping spread the virus. Suga resisted growing calls from regional leaders to declare a state of emergency -- retreading a debate that drove down Abe’s popularity before he resigned due to the return of a chronic illness.

Suga finally declared an emergency for the Tokyo region on Jan. 7 after several record-breaking infection announcements, a move that about 80% of respondents to a survey by public broadcaster NHK said was too late. Last week, he added other areas including the Osaka region, putting a portion of the country that accounts for more than half of the nation’s economic output under restrictions.

The expansion also strengthened the likelihood of the world’s third-largest economy slipping back into reverse this quarter. Economy Minister Yasutoshi Nishimura said Thursday the current area could be further expanded, depending on infections.

“There was no crisis management strategy under the Abe administration,” said Tomoaki Iwai, a professor at Nihon University in Tokyo. “He has stuck with that line and paid too much attention to the economy and other factors.”

Making matters worse, Japan isn’t expected to begin mass vaccinations until February. And media surveys show a growing consensus the Tokyo Olympics, already pushed back a year to July 2021 due to the pandemic, should either be delayed again or canceled altogether -- something Suga has vowed not to allow.

The premier doesn’t have much time to turn things around. Japanese law requires a lower house election by October. Suga is serving out the last year of Abe’s three-year term and will need to get the LDP’s support to stay on after September.

Suga’s party has held power for all but about four of the past 65 years thanks in part to an often disorganized opposition. A merger of the two largest opposition groups last year didn’t bolster support enough to pose a serious threat, though the ruling coalition could face a reduced majority.

Possible candidates to replace Suga as LDP leader include Chief Cabinet Secretary Katsunobu Kato, Economy Minister Nishimura and Administrative Reform Minister Taro Kono. Yet such current cabinet members could also be blamed for the government’s failures, Iwai said. That could even prompt the LDP to turn to an old stalwart: Abe.

“Because there’s no one else, people may start to talk about bringing Abe back,” Iwai said. “That’s a sad state of affairs.”