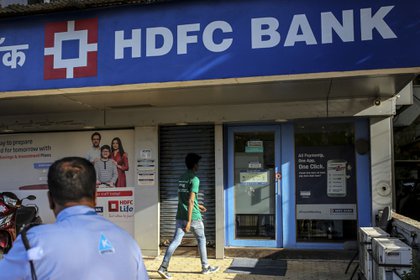 A man walks towards an HDFC Bank Ltd. branch in Mumbai, India, on Saturday, April 21, 2018. HDFC is scheduled to announce fourth-quarter earnings on April 30.

Net income was 87.6 billion rupees ($1.2 billion) in the three months to December compared with 74.2 billion rupees a year earlier, exchange filings on Saturday showed. That beat the average estimate of 76.4 billion rupees from 18 analysts, according to data compiled by Bloomberg.

India’s most valuable bank by market capitalization is the first lender to report third-quarter results. While banks largely withstood the coronavirus pandemic’s economic fallout due to a revival in consumer spending, a six-month moratorium and a loan restructuring program has masked some of the soured debt.

The gross bad loan ratio at the bank led by Chief Executive Officer Sashidhar Jagdishan narrowed to 0.8% at the end of December from 1.08% three months earlier. The ratio would have been 1.38% without the relaxation of rules regarding the recognition for bad debt, the bank said in the filing.

To read about the boost to banks’ consumer loan book

HDFC Bank’s loan book grew by an annual 16% in the October to December period, out pacing the sector’s average growth of 6%. Last year, the bank was ordered to curb some digital and credit card operations following a series of technical glitches, a rare step by the financial regulator as online transactions surge in the nation.