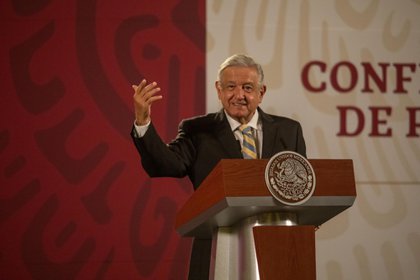 (Bloomberg) -- President Andres Manuel Lopez Obrador said that evidence the U.S. government handed over to Mexico against its former defense minister has “no value,” widening a rift on law enforcement policy between the two nations.

Mexico’s Attorney General’s Office opted not to bring charges against General Salvador Cienfuegos Zepeda on Thursday after saying it found no proof that he’d collaborated with a drug cartel. The U.S. had arrested Cienfuegos in October but dropped the drug case and turned the former minister and the investigation over to Mexico to avoid an international dispute. Mexico had blasted the U.S. for not informing it of the probe.

The U.S. Justice Department responded Friday that it reserves the right to resume prosecution of the general if Mexico fails to do so.

The president’s latest criticism of U.S. law enforcement only deepens a rupture in what used to be close drug-enforcement cooperation between the two nations. Mexico recently passed legislation limiting foreign agent activity on its soil, which Lopez Obrador said was a direct result of the U.S. arrest of Cienfuegos.

“The people who did this investigation did not act professionally,” Lopez Obrador said at his press briefing Friday. “We have to know what is going on in our country, who is intervening here, under what conditions, and that our Constitution is not being violated,” he said.

Once the top military official in the country, Cienfuegos was accused by the U.S. Department of Justice of collaborating with drug-traffickers and accepting bribes from them.

The capture of Cienfuegos in Los Angeles had stunned Mexican government officials, who said that the secrecy about the investigation headed by the U.S. Drug Enforcement Administration was a violation of the nation’s sovereignty.

U.S. prosecutors had dropped their charges at the behest of Mexican officials, and Cienfuegos flew back to Mexico, where the public waited for weeks to see if the allegations would lead to an arrest.

The evidence that U.S. prosecutors had provided was flimsy, said AMLO, as the president is known. The information from BlackBerry mobile phones that appeared in the documents will be released to the public, along with all of the other evidence provided by the U.S. authorities, he said.