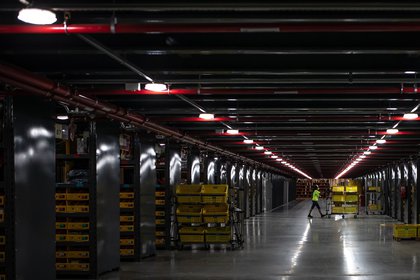 A worker pushes a cart at a MercadoLibre Inc. distribution and fulfillment center in Cajamar, Sao Paulo state, Brazil on Friday, Nov. 27, 2020. MercadoLibre is having another year of strong top-line growth, likely reaching 65% in 2020, after a slow start when the Covid-19 pandemic led to government lockdowns.

(Bloomberg) -- MercadoLibre Inc., Latin America’s largest e-commerce retailer, is seeking to expand its electric delivery-vehicle fleet to 1,000 or more from just 70 after selling $1.1 billion of debt that included a $400 million tranche of sustainable bonds.

The company, whose recent logistics push includes dedicated aircraft operated by existing cargo carriers in Brazil and Mexico, plans to expand its electric delivery fleet by at least 14 times, according to Andre Chaves, a senior vice president at the Buenos Aires-based firm.

“We’re seeing positive results and adoption of electric vehicles within our network should intensify going forward,” Chaves said in an interview.

MercadoLibre, which has about 10,000 standard delivery vans in Brazil alone, is stepping into the electric world as its shares more than doubled in the past 12 months, fueled by pandemic restrictions that stoked interest in online purchases. Back in 2019, Amazon.com Inc., the world’s largest e-commerce retailer, announced plans to buy 100,000 electric vehicles and committed to zeroing out its carbon footprint by 2040.

MercadoLibre’s bond offering came after sales of sustainable debt by companies and governments across Latin America and the Caribbean rose to a record $17.6 billion last year, led by more than $6 billion of green bond sales, according to data compiled by BloombergNEF.

MercadoLibre will also use part of proceeds to speed up financial inclusion in the region, boosting its credit concession to small businesses and entrepreneurs, many of whom are taking loans for the first time, according to Chaves.