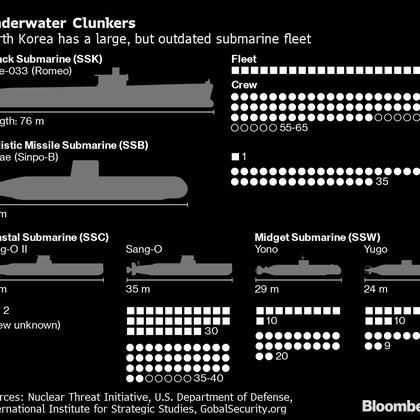 (Bloomberg) -- Kim Jong Un has rolled out a lot of new missiles in recent months, including at least one more this week. The next step is for him to fire them into the air to get President-elect Joe Biden’s attention.

The North Korean leader paraded a new submarine-launched ballistic missile through central Pyongyang Thursday as part of a military pageant to mark the completion of more than a week of ruling party meetings. The Pukguksong-5 -- the largest in an growing line of solid-fueled nuclear missiles -- moves Kim closer to a opening a maritime front in his strategic struggle with the U.S.

The new missile comes only four months after Kim unveiled a smaller version of the same rocket at a similar military parade in October. That event also featured a massive new intercontinental ballistic missile, which is believed to be the world’s largest road-mobile weapon of its sort.

The problem for Kim is that many of these new systems haven’t been proven, diminishing their value as a deterrent against an American attack. If Kim wants to achieve the ambitious nuclear program he outlined at Workers’ Party gatherings this month, he’ll need to start launching soon.

“I am certain we will see tests in the near future,” said Melissa Hanham, a non-proliferation expert and an affiliate with the Stanford Center for International Security and Cooperation.

North Korea hasn’t fired off an ICBM since November 2017, when Kim moved to open communications with U.S. President Donald Trump. Kim has already declared an end to the testing freeze he put in place to facilitate talks with Trump and earlier this week reaffirmed that the U.S. was his “biggest main enemy.”

The next launches may illustrate how rapidly North Korea has developed its nuclear delivery systems over the past few years, despite tough international sanctions and Trump’s three face-to-face meetings with Kim. The provocations may also help pressure the Biden administration into making concessions.

North Korea tested President Barack Obama with the launch of a long-range rocket and a nuclear device within months after he took power in 2009. He welcomed Trump with a series of tests culminating with the launch of an ICBM that experts said could deliver a nuclear warhead to the entire U.S.

“The Biden administration need not accept this as a done deal,” said Ankit Panda, a Stanton Senior Fellow in the Nuclear Policy Program at the Carnegie Endowment for International Peace. “An early signal from the U.S. could stay Kim’s hand, but Biden would have to offer a clearly valuable inducement, like the prospect of sanctions relief.”

The Biden administration has indicated it may be ready to ease sanctions in exchange for steps by Kim to freeze, cap and wind down his atomic arsenal. This could help Kim fix an economy that has only gotten smaller since he took power about a decade ago.

Kim has vowed never to surrender the nuclear arsenal he views as key to his regime’s survival. Each new missile helps bolster his argument that the U.S. should drop its demands for “final, fully verified denuclearization” and accept North Korea as a nuclear-armed state.

Earlier this month, Kim outlined plans for smaller and lighter nuclear weapons, improving the ability to strike strategic targets within 15,000 kilometers (9,320 miles) -- a thinly veiled allusion to the U.S. He said he was seeking to develop solid-fuel ICBMs and a nuclear-powered submarine.

Koh Yu-hwan, president of the government-funded Korea Institute for National Unification in Seoul, said North Korea may hold off on testing the Pukguksong missiles for now. “Kim may just want to send a message to Washington that his weapons would only advance if the U.S. continues to press him,” Koh said, saying the goal was “opening up the possibility of talks with the new administration.”

Kim’s latest SLBMs would require a vessel with more capacity than his only current missile submarine, the Gorea, said Joseph Dempsey, a London-based research associate for the International Institute for Strategic Studies.

“The considerably wider body diameter of the Pukguksong-3, -4 and now -5 raises the question if any of these missiles could be fitted on this boat, even with extensive modification,” he said. North Korea is building at least one other ballistic missile submarine, he said.

Although it could be years before Kim deploys a bigger submarine, the program will require lots of provocative tests. North Korea may conduct ejection tests of the new Pukguksong-5 on land before launching it off a submerged barge and finally from a submarine, said Hanham, of the Stanford Center.

Moreover, the weapons move North Korea closer to developing solid-fueled ICBMs, which can be stored full and moved quickly to evade a counterattack. The diameter of Kim’s latest Pukguksong missiles appear to have reached the key 1.7 meter (5.6 feet) threshold needed to build one capable of crossing the Pacific, said Jeffrey Lewis, director of the East Asia Nonproliferation Program at the Middlebury Institute of International Studies in California.

“We’ve been saying for a year that North Korea could test a solid-propellant ICBM in 2021,” Lewis said. “I would expect more missile tests in the coming year, unless there is some dramatic change in the relationship.”