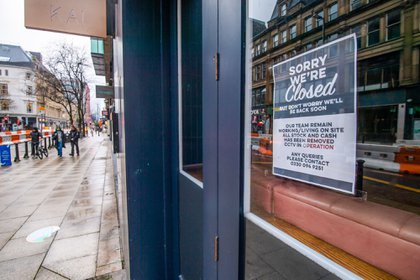 A sign in the window of a closed restaurant on Deansgate in Manchester, U.K., on Thursday, Dec. 31, 2020. From Thursday, three-quarters of the population of England -- 44.1 million people -- will be in the top tier of lockdown measures as the new strain of the virus piles pressure on hospitals already stretched to capacity by the pandemic. Photographer: Anthony Devlin/Bloomberg

(Bloomberg) -- Insurers fell short in a last-ditch attempt to dodge payouts to thousands of small businesses that were forced to close during lockdown, as the U.K.’s top court ruled in favor of policyholders in a dispute over Covid-19 claims.

The U.K. Supreme Court ruled Friday that policies sold by six firms including RSA Insurance Group Plc and Hiscox Ltd. cover losses sustained when businesses were shut down to help slow the spread of the outbreak. The firms had appealed a lower-court decision in September that found some policies in a test case brought by the U.K.’s top markets regulator should pay out.