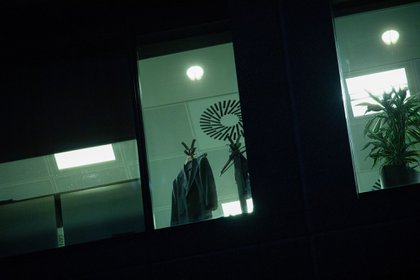 A suit jacket hangs inside an office building in the Canary Wharf business, financial and shopping district of London, U.K., on Monday, Sept. 14, 2020. Londoners are steadily increasing their use of public transport after schools reopened, freeing parents to go back to the workplace. Photographer: Simon Dawson/Bloomberg

(Bloomberg) -- A hedge-fund employee wanted in a German Cum-Ex probe is among five people in a London court trying to use Brexit for the first time to fight extradition to European nations.

The group, which includes an operations manager from London’s Duet Group, argues that Brexit has rendered their arrest warrants invalid. Another participant, who’s a convicted sex offender, is fighting deportation to Lithuania where he’s accused of robbery.

The U.K.’s last-minute agreement with the European Union was able to prevent a no-deal Brexit, but leaves many issues outstanding. The case in London is the first to test the status of extraditions between Britain and the remaining EU member states and will set a legal precedent for judicial cooperation going forward.

If the High Court application succeeds, it will have a “widespread affect on many hundreds of cases,” David Josse, a lawyer representing the individuals, told the court at Friday’s hearing. “We suspect the ramifications would be very significant.”

He argued that because the U.K. hasn’t been a part of the European Arrest Warrant program since the Brexit transition period ended Jan. 1, the court no longer has the power to rule on those extradition requests.

Read More: Brexit Deal Forces Prosecutors to Swap a Ferrari for a Citroen

“It was inevitable that someone would want to test the new, post-Brexit extradition arrangements in court as soon as possible,” said Nick Vamos, an extradition lawyer at Peters & Peters who’s not involved in the case.

A spokesman for the U.K.’s Crown Prosecution Service said that, under the terms of the Withdrawal Agreement, extradition arrangements for suspects who have already been arrested under a EAW will remain the same. He added that authorities have further contingencies in place for any new cases to help ensure suspects face justice.

“However, there may well be some ingenious or technical arguments as to why Parliament’s intention may have failed to translate properly into the new law,” Vamos said. “The court will be anxious to ensure a smooth transition if possible, but if there is a loophole or an error then I have no doubt that someone will find it.”

The Duet employee, Vijaya Sankar, was arrested under a EAW at his home in June and has been on bail ever since. The allegations include three tax frauds relating to Cum-Ex trading and date from Autumn 2009 to July 2010, his lawyer said in a court filing. The 44-year-old hasn’t been charged with a crime.

Prosecutors in Belgium, Denmark and Germany are trying to extradite several London financial professionals over allegations that investors illegally made billions by rapidly trading shares to obtain multiple refunds on dividend taxes paid only once, a method known as Cum-Ex.