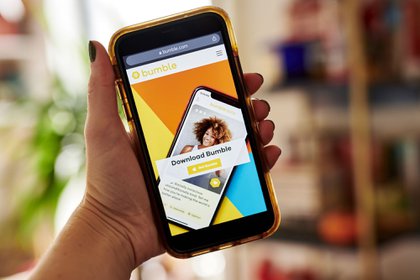 The website home screen for Bumble is displayed on a smartphone in an arranged photograph taken in the Brooklyn borough of New York, U.S., on Friday, October 9, 2020. Photographer: Gabby Jones/Bloomberg

(Bloomberg) -- Bumble Inc., the dating app where women make the first move, has filed for a U.S. initial public offering.

The Austin, Texas-based company listed in its Friday filing with the U.S. Securities and Exchange Commission an offering size of $100 million, a placeholder amount that will likely change.

Bumble, started in 2014, could seek a valuation of $6 billion to $8 billion in the listing, Bloomberg News has reported.

The listing could come around Valentine’s Day, though not on that exact day because it falls on a weekend, people with knowledge of the matter have said.