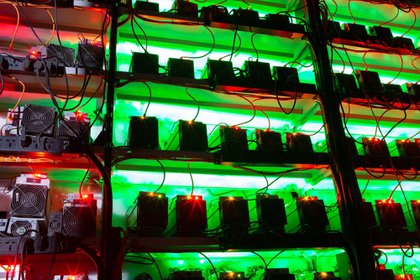 (Bloomberg) -- Bitcoin’s record-breaking rally seems to have hit a wall, with prices set to finish the week just below $40,000.

After starting the year with a surge that took Wall Street by surprise, the volatile cryptocurrency has been range bound in recent days. Bitcoin was trading around $38,280 as of 11:45 a.m. in London, set for a 4.4% drop on the week, the biggest since November.

“I think Bitcoin is real, has further to run, and the recent selloff was probably profit taking,” said Gregory Perdon, co-chief investment officer at Arbuthnot Latham in London. “I can understand why people think this is a deja vu of 2017.”

The massive gains in Bitcoin recently have renewed the debate over whether it’s a real asset class or a speculative bubble. Advocates say cryptocurrencies make sense at a time when central banks are printing money and the market’s infrastructure is rapidly improving. Critics, on the other hand, argue that Bitcoin is another symptom of market froth, with prices prone to manipulation.

Either way, more regulators are starting to take a critical look at the market. The U.K.’s financial watchdog issued a warning this week that consumers betting on cryptocurrencies should be ready to lose everything.

”Cryptocurrencies are not sustainable,” said Peter Branner, the chief investment officer at APG Asset Management. “Bitcoin is not backed by a central bank. It only has a value if people gives it value.”