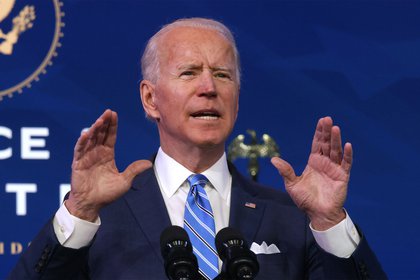 WILMINGTON, DELAWARE - JANUARY 14: U.S. President-elect Joe Biden speaks as he lays out his plan for combating the coronavirus and jump-starting the nations economy at the Queen theater January 14, 2021 in Wilmington, Delaware. President-elect Biden is expected to unveil a stimulus package with a price tag of trillions of dollars including a $1,400 direct payment to individuals who have been struggling with the economic turmoil caused by the COVID-19 pandemic. (Photo by Alex Wong/Getty Images)

(Bloomberg) -- President-Elect Joe Biden proposes to overhaul eligibility rules for coronavirus vaccines and open more sites to receive shots, but his plan to rev up U.S. innoculations largely retains the bones of the Trump administration’s system.

With Biden due to speak Friday in Wilmington, Delaware, his office released changes he’d make to boost vaccination rates. His pledges are vague about time lines, reinforcing Biden’s previous warnings that there’ll be no quick fix.

Biden and his aides have increasingly criticized the Trump administration’s vaccine rollout, which has fallen short of inoculation targets so far. But the president-elect’s plan amounts to a revision of Trump’s effort, not a rewrite.

As president, Biden will encourage states to abandon a complex series of priority groups that’s been used to triage vaccination and instead focus on giving shots to front-line essential workers and anyone over 65, according to an announcement Friday by his transition office. He plans to set up community vaccination centers and mobile clinics and “jumpstart” an effort to make shots available at pharmacies.

Biden threatened to use the Defense Production Act to boost the manufacture of vaccines and the supplies required to administer them, such as vials and needles. The announcement included few specifics.

Biden is preparing to be sworn in next week under heavy security in the aftermath of a deadly Jan. 6 riot at the U.S. Capitol, and against the backdrop of a raging pandemic that is the biggest crisis of his nascent presidency. The U.S. set records this week for daily coronavirus deaths -- there were 3,899 on Thursday alone -- while new cases and current hospitalizations hover near record-levels.

Biden has promised Americans his administration will quell the pandemic, while also warning it won’t be easy or fast.

The president-elect unveiled his pandemic relief plan a day earlier, proposing a $1.9 trillion package that will face hurdles in Congress. On Friday, he further detailed the vaccination plan.

Biden’s vaccination push for front-line workers includes teachers and grocery store employees, as well as health-care workers. He committed to releasing the “vast majority” of vaccines rather than withholding second doses, a change the Trump administration already made this week. That risks not having enough doses when people are due for their booster shot after three or four weeks.

The Trump administration has sought to smooth out a rocky vaccine rollout. Since coronavirus vaccines were introduced in the U.S. in mid-December, 11.9 million doses have been administered, according to Bloomberg’s vaccine tracker. That represents just 39% of the shots that have been distributed.

The rollout is racing against the clock. The U.S. has had more than 23 million confirmed cases, and is regularly recording 250,000 new cases each day. About 389,000 Americans have died, with the U.S. on pace for 400,000 deaths by Biden’s inauguration.