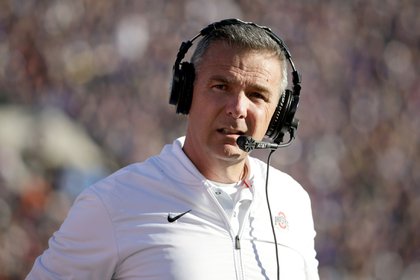 PASADENA, CA - JANUARY 01: Ohio State Buckeyes head coach Urban Meyer looks on during the first half in the Rose Bowl Game presented by Northwestern Mutual at the Rose Bowl on January 1, 2019 in Pasadena, California. (Photo by Jeff Gross/Getty Images)

(Bloomberg) -- Urban Meyer, the three-time national-title-winning football coach at the University of Florida and Ohio State University, is finalizing a deal to become head coach of the NFL’s Jacksonville Jaguars, according to Yahoo Sports.

Meyer is one of the most successful coaches in college football history, though he left Ohio State after the 2018 season citing health concerns and under scrutiny for his handling of a domestic-abuse accusation against a member of his staff. His 85% winning percentage trails only Notre Dame legends Knute Rockne and Frank Leahy among those who have coached at the sport’s highest level, and he’s one of just 15 coaches to have won three or more national championships.

The Jaguars, owned by billionaire Shahid Khan, were the worst team in the NFL in 2020.

While Meyer had said that he was unlikely to coach again after leaving Ohio State, the Jacksonville job offers the coach something no other franchise could: the ability to build a team around Trevor Lawrence, the Clemson University superstar and presumptive first overall pick in the 2021 NFL draft.

For the past two seasons, Meyer has served as a college football studio analyst for Fox Sports and has taught a character and leadership course at Ohio State.